While I've never been a big soccer fan I will always watch the World Cup. I enjoy the expectations and drama -- entire countries become jubilant or depressed over one game. An underdog beating a marquee team could cause tens of millions of people to party until morning. Fans dress up like it's a costume party. World Cup for most of the world is like Canada following the hockey during the Winter Olympics.

So naturally most of the guys in the office were talking about it. You'll have to trust me that this is not me jumping on the bandwagon but from the get-go I was backing South American teams. It seemed that everyone in the office was always going on about the European teams and with the exception of Argentina and Brazil they were dismissing the rest of the South American teams. I disagreed and in fact stated that my "dark horse" team was Chile. (I always pick one underdog team to root for, in the last World Cup it was Ghana.)

Well the round-robin is over and of the 15 round-robin games that South American teams played they only lost one. All five South American teams are through to the knockout stages, and 4 of the 5 won their groups. Contrast that with Europe where France and Italy were knocked out early, and both England and Spain needed a win in their last game to advance. I'm sure people in England were outraged that the much-maligned USA wound up winning the group that England was in.

Africa did not fare as well which is a shame because there were high expectations that with the tournament being held in South Africa the African teams should do well. Of the six teams from Africa only one made it through to the knockout rounds (Ghana). The hosts South Africa did not make it through, the first time in World Cup history that the host did not advance from the round-robin stages.

Anyway having seen the round-robin matches I'm backing Chile as the underdog team and Spain as the "most likely to win" team.
Posted by Glen McKay at 12:02 AM No comments:

So before summer really got into full swing, with its 45+ degree temperatures, I wanted to go to the beach. I had not been to a beach in Qatar since maybe October 2009 and I figured I should since for the rest of the summer I'll be indoors or sitting in the shade by a pool. There was a beach reasonably close to where my Turkish friend lived that I had never been to, called Wakra beach. He had never been there either so we figured what the heck let's go there in the morning when it is not too hot and check it out. 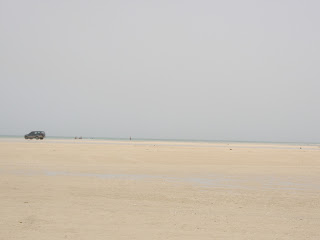 It's actually more of a tidal flat so the water was really shallow. You can maybe even see that car out on a little "island" in the distance, though the water surrounding it was probably little more than a foot and a half deep. The sand around us was still wet from the outgoing tide so we put our gear on a cinderblock and started heading into the water. Qatar is generally so flat you can go out a long way, I think we walked about 150 m before we got into water that was even waist deep. Walking over 100 m in knee-deep water gets pretty tiring.

What was strange is that in most parts the water was quite warm but then suddenly you would enter another area and the water would cool considerably, probably by 6 or 7°. It was a really sudden transition so both my friend and I were quite surprised when we hit the cool zone. But then go another 20 m and the water was warm again. The cold water was more refreshing so we stayed in that.

Why was there this area of cold water? I have my suspicions ...

Nope, I have no idea what that is in the background. I don't think I want to know. Ignorance truly is bliss sometimes.

Overall I found the beach experience fairly unrewarding and after a swim and having a quick bite on the towel we took off back to his place.

I will note that Wakra is building a marketplace that is nearby very similar to Souq Waqif (the old souq) in Doha, but right by the shore. It will probably be ready in about a year and I think it'll be very nice when it's done.

Back to the beach. I think I was a little underwhelmed by the whole experience because not a month back I was here ...

[ATTENTION GOOGLE IMAGE SEARCHERS -- THIS IS NOT A PICTURE OF A QATAR BEACH!] (it seems like anyone using GIS for "qatar beaches" gets this photo. No idea why.)

No comparison. Bermuda does spoil you for beaches. I have traveled a lot and so far the beaches in Bermuda have been the best in the world that I have experienced. Hands down.
Posted by Glen McKay at 12:30 PM 2 comments:

I know, I haven't posted for a long time. I'm okay – nothing’s wrong.

I have been swamped at work so I have not had a lot of time for blogging. More importantly the Internet has conked out in my building and with luck they will finally have it fixed in the next couple of days. I'm posting this from the computer at work, which is something I don't like doing but I figure it's been so long since I posted I figure I better give everyone an update lest you all think I'm in the hospital or something.
Posted by Glen McKay at 9:46 PM No comments: