For that last few days Qatar has gone over 500 cases a day, and today we crossed the 600-mark at 602. Hospitals are starting to fill up again and the deaths are climbing, in the last three days seven people have passed away from the virus. To give you an idea on 21 December I posted that there were fewer than 220 people in hospital for COVID of which 22 were in ICU. Now there are 1,350 people in hospital and 244 in ICU. This week two cases occurred in the office where I worked so the whole floor was shut and everyone had to work from home. Well, except me as I recently recovered from COVID so I went in each day and 'held the fort' so to speak. It was odd having the whole floor to myself.

The Government has reimposed restrictions, shutting some types of business, banning people under 12 from malls, restricting capacity at restaurants, and majlises can have only up to five people. The restrictions seemed geared towards Qataris as offices are still allowed to run at 80% occupancy so I suspect a lot of the cases are amongst the Qatari population.

Vaccination efforts have stepped up and the Government how gives daily stats on the number of doses administered. It is around 700,000 doses now so I suspect about 200-250 thousand people are fully vaccinated and the rest have their first dose. Around 20,000 doses are being administered every day now. There's still a ways to go yet, at that rate to get 70% of the population vaccinated would take around 5-6 months. I think expats 50 and older can book an appointment now, and any Qatari over the age of 16.

So it looks like another time to semi-isolate. I have food stocked up so I don't need to go to the grocery store for a few weeks. I will still stop by a friend's majlis occasionally, pretty much everyone there is now either fully vaccinated or recovered from COVID recently. Last time I was there there were 10 people and two were not vaccinated/recovered yet, of whom one was someone who was rarely there. The other guy is getting his first vaccine dose on Sunday.

Posted by Glen McKay at 5:52 AM No comments:

Qatar is still averaging over 400 cases a day (roughly the equivalent of 50,000 cases a day in the US) so the semi-restrictions are still in place. I heard a rumour that if it ever goes above 500 a day the Government will do a harsher lockdown but over the last few weeks it never reached that. I think the daily rate won't go much higher as it appears to be slowly going down in other GCC countries.

Qatar is still doing better than the rest of the GCC, both in terms of daily rates and in deaths, so the Government's actions are making a difference.

The Government has stated that over 300,000 doses of vaccine have been given out, but that means that probably less than 10% of the population has received at least one dose, still a long way to go. The vaccine is now available to every Qatari over 16, and to expats age 50 or older. As I came down with Covid in February I have to wait 90 days to receive the vaccine but almost all of my Qatari friends have been vaccinated now. That incident at a majlis where myself and three others were infected really spooked everyone and they rushed out to get vaccinated, which was a good thing I suppose. Wish some of us didn't get sick first.

So I tried to buy tickets to the Qatar ExxonMobil Tennis tournament. As usual there were some great stars, including Roger Federer in his first tournament in over a year due to getting knee surgery, so there was a lot of excitement in the tennis world and all the major papers were following the event. Going online this is what I saw:

So on Wednesday night I was sitting at home when I got a call from a friend.

"I managed to get tickets! Can you get to the stadium ASAP?"

Luckily I live within a few metro stations of the tennis stadium so I was off, got there in about 30 minutes. Turns out my friend knew someone who had tickets but had to cancel so called my friend and offered the tickets to him.

We got inside just as the second set was underway.

Of course we had to show our Covid tracking app as well just to get into the grounds. Now the Government was strict about the social distancing, you could only sit in every fourth seat. All the other seats were tied shut so you could not open them to sit next to someone. It was staggered so you were not sitting near someone in the next row either, they were two seats away. It was a bit weird, sitting in a quarter-full stadium with everyone equally spaced.

Worth it to see Roger Federer though. 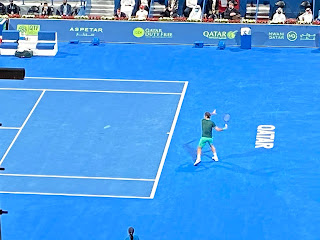 The match (against British no. 1 Daniel Evans) was a bit up and down, Dan was playing well but Federer was brilliant one moment, then shanking the ball the next. At the end of the last set suddenly Dan messed up a couple of points, giving Federer an opportunity and he managed to finish it on the second match point. It really could have gone either way. 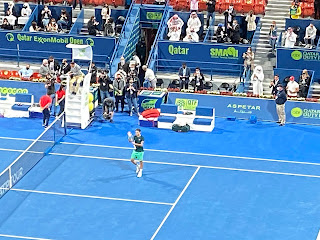 Posted by Glen McKay at 4:34 AM No comments: