One of the nice things about Ramadan is that you get a lot of invites to iftars or sohours. Whether from friends or corporate events there's plenty of opportunity to eat out. One would think since Ramadan is about fasting people would generally lose weight but it's usually the reverse, once the sun sets the eating begins! I think I've been doing pretty good this year, trying not to overdo it at buffets and when I'm at home my meals are definitely low-cal (soups, vegetables, tuna, low-cal protein bars).

Here was what I was up to this month:

W Hotel iftar buffet. A popular venue and has a reputation for some of the best sushi in town. I was here twice on different invitations, which shows how popular it is with corporate groups as well. 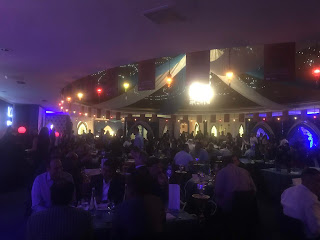 Mondrian sohour tent. Actually their main ballroom decorated in an Orientalist tent style. Beautiful room, was the nicest decorations of any of the hotels that I ate at. They also had an Austrian dessert section with strudels! Not something that I was expecting for sohour but they were delicious. 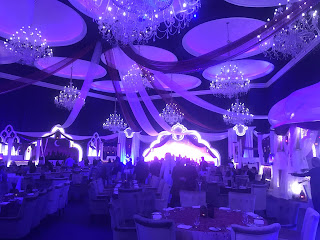 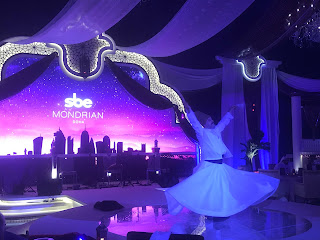 St. Regis iftar. Popular with my Qatari friends, we've gone every year for the last three years. This time there was something like 20 of us for the buffet. 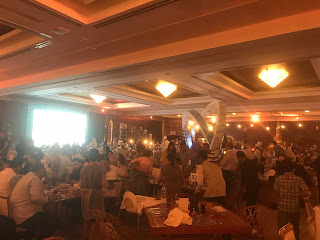 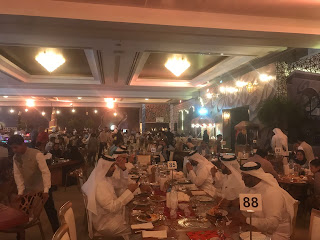 Kempinski (Pearl) iftar. I've only been to this hotel once before but they put out a nice spread. We arrived early which is why it looks empty. 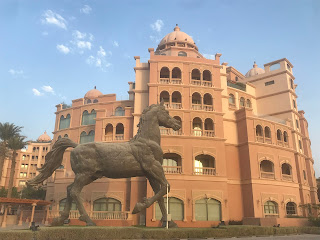 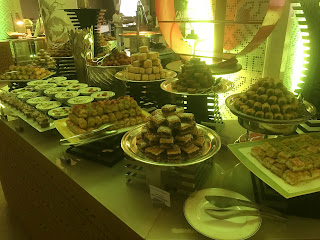 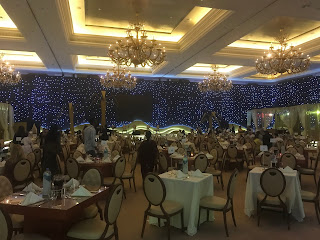 Iftar/sohour at friends' homes. More often sohour than iftar (you need to go pray after iftar so if you have friends over the meal will not be hours long). Traditional platters of meat or seafood on rice. You all sit on the floor and eat using your right hand. 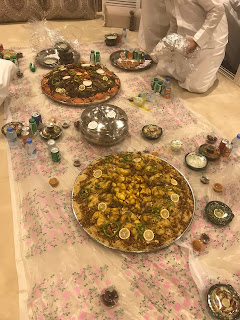 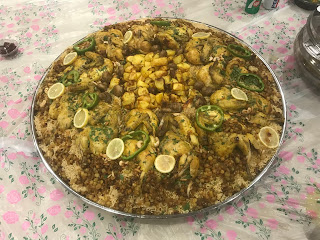 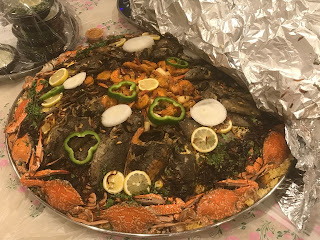 Like I said, it's not easy to resist digging in when you go have these lavish meals. I'm not going to rate the hotels, they all had nice food. I will say that some of them (not naming names) had the tables too close together in order to pack in as many people as they could, which got annoying at times. Every place I went to was packed so if the tables were too close it was a challenge getting around and having people constantly passing by your chair.

Alas, Ramadan is almost over and so no more big buffets.

Email ThisBlogThis!Share to TwitterShare to FacebookShare to Pinterest
Labels: Ramadan

Another Ramadan tradition in Qatar is for people to take their cars down to the Corniche starting around 4:00 or so and just cruise along the road. It's not an official parade, just a way to pass the time while waiting for iftar and to see interesting or expensive cars. Some Qataris bring out vintage cars or other unusual vehicles to display on the Corniche.

It was pretty late in Ramadan that I went to it this year and there weren't as many cars as I was expecting. Maybe because it was also a Saturday? Anyway, we had a number of participants: 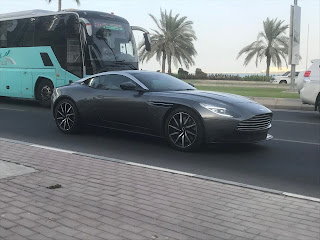 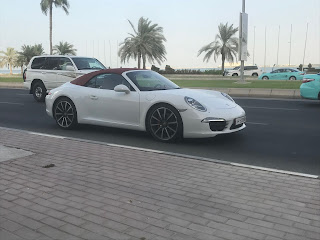 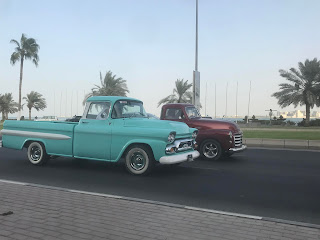 Cars of a similar make grouping up and going down all three lanes slowly: 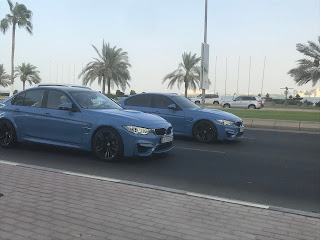 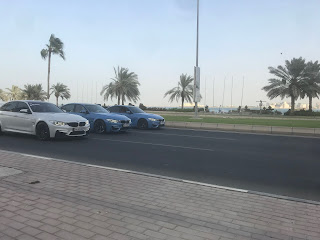 Children looking out the windows or sunroof (the police have cracked down on this in recent years but I still saw it occasionally): 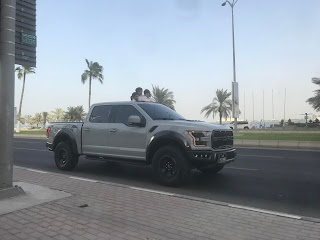 And Qataris driving cars that you wouldn't usually see them drive: 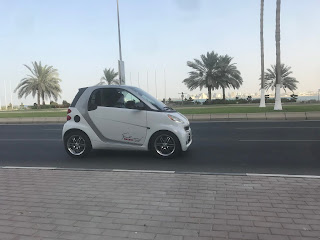 Ramadan is almost over so if you want to see nice cars go to the Corniche in West Bay around 4:30 or so.

Email ThisBlogThis!Share to TwitterShare to FacebookShare to Pinterest
Labels: Ramadan


It wouldn't be Ramadan without a visit to the Ramadan Cannon. Every Ramadan the Government sets up a cannon at the State Mosque, which fires to signify the end of the fast for the day. 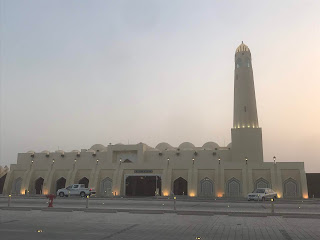 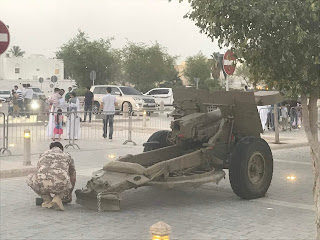 Part of the fun is that before it is fired kids are allowed to climb on it. What kid doesn't want to climb on some military hardware? (I know I would have.) 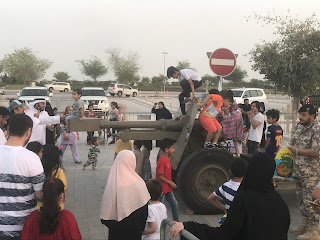 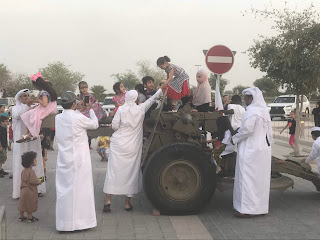 But when it is near the time everyone is cleared away from the cannon. 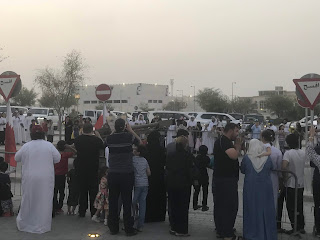 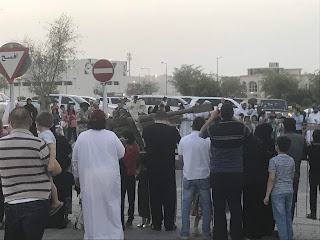 Note that I'm standing much further away and using max zoom. The cannon is LOUD (it's a cannon!) and as far as I'm concerned everyone was too close. 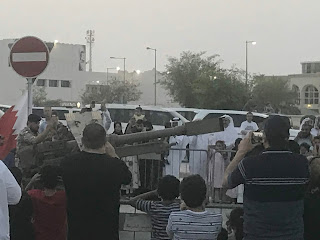 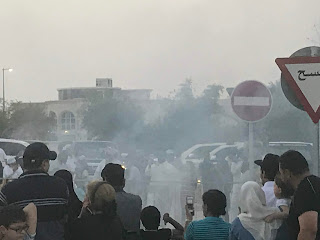 After which is the crying from frightened toddlers who were shocked by the loud noise. Even from where I was my ears were ringing slightly for a minute, it would have been worse for the people who were closer. At least it was now time to eat. Lots of people had food & water waiting in their cars while others hurriedly went home to have iftar. I had a bottle of water, dates and some bread in my car for breaking the fast.

If you go visit stand further back and cover your ears.