Hard to believe but the 1st of May will mark my 13th year in Qatar. 13 years! I never would have guessed that I would have been here this long.

Coming here was a straight-forward expat story. I was looking for a new job and it so happened that a former colleague had moved to Qatar so when his office was looking for someone with my background he sent me an email to see if I would be interested in applying. A couple of interviews later and I had the job so I packed up and moved to Qatar. Aside from flying in for the interview (and for that I was here less than 24 hours) I had never been to the Middle East before. But it wasn’t the first time I packed up my life and moved somewhere I wasn’t familiar with, when I took a job in Bermuda I hadn’t even been flown in for the interview so I already had accepted the job when I moved there. I like travelling and seeing new places so it wasn’t as intimidating as it might be for many. Being single helped too.

When I arrived Qatar was already in the grips of large-scale change as the Emir was ambitiously transforming the country. Skyscrapers were going up, roads were being built, new malls and museums were under construction, new apartment buildings and compounds were going up everywhere, and Qatar Airways was growing like crazy. When I arrived the population was something like 850,000 people, now it’s 2.7 million. It’s a staggering average growth of 9% a year, and that’s through the 2008 financial crisis and the 2014 slowdown due to the oil price drop so in fact most years it was more, I think in the early days 15% population growth was fairly standard. Construction couldn’t keep up with demand and for a long time the rental prices for homes and offices were sky-high. Everything was challenged by the growth. Ever been to a car dealership where staff didn’t bother you? I have. They didn’t need to bother you, the cars were selling as fast as they were bringing them in so if you weren’t buying it didn’t matter, someone would.

Thankfully the pressure has eased and population growth has slowed somewhat, with the population growing only 50,000 or so a year (only!). Vacancies are up and rents have been easing to a more affordable range. Traffic is still bad though, hopefully when the Metro is finished it will ease things a bit.

Being in Qatar this long has made me an ‘old-timer’ amongst a lot of expats. I actually get gasps of disbelief sometimes when I tell someone how long I’ve been here. I think it’s odd, plenty of expats have been here longer than I have, but in expat circles it seems like 3-5 years is the norm before you move on. My office has something like 100 employees and only two of them have been there longer than I have so I suppose frequent turnover does happen. I think some of the issue has to do with how in the early days there was not a lot to do. Most of the amenities and shopping areas that people use now did not exist when I first arrived: three-quarters of the buildings, 80% of the hotels, most of the malls, Souq Waqif, Katara, the Pearl, Aspire Zone, the museums, they weren’t here. I remember when a new hotel would open, EVERYONE went there (if it served alcohol as hotels were the only new things to get a liquor license), and for the next month it would pretty much be the only place anyone wanted to go. It was somewhere new! Now a new hotel opens and it’s just not an event, there’s tons of hotels so a new one is lost under the radar. I just found out a new 5-star hotel opened months ago. In the early days everyone would be talking weeks in advance of its opening. Not that I go to bars much anymore.

It's surprising how over time my friend group had fewer and fewer Western expats and instead it slowly became more Muslim and Arab. Hence why I do not go to bars anymore, none of my friends drink. I count myself fortunate to have a lot of local friends now, I think it really helped me to settle in and stay for the long-term. In the early days I probably would not have had an issue leaving after 4-5 years if a good enough opportunity came along, now it is not as easy, why abandon a comfortable life to start anew? In other words, I’m not in a rush to go anywhere. Not saying it’s not impossible, life happens and circumstances change, but so far the plan is to be here for anniversary number 14.

In the last few weeks I’ve noticed that cafes are now displaying nutritional information, including calorie counts, of their food and drinks. When I saw Tim Hortons doing it I thought it was a nice thing for them to be doing, but when I noticed a second cafe, then a third, also displaying it that’s when I knew it must have been a change in the law. 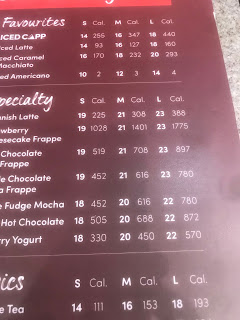 I didn’t recall hearing an announcement about that so a quick internet search showed that it wasn’t a recent change. The Ministry of Economy had announced it in mid-2018 but first did a six-month pilot project before it would roll out the new requirements. Looks like the pilot phase is finished and cafes have started putting up signs.

I definitely welcome this change. Trying to figure out the calories in prepared foods can be a real challenge and most times people watching calories tend to under-estimate the amount of calories in a meal. Sometimes logic and instinct don’t work – you’d think that vegetarian falafel sandwich would have fewer calories than the steak and cheese, right? Nope, the falafel is deep-fried and (I’m guessing) comes with high-calorie tahini sauce. Displaying calories and other information has definitely been a wake-up call about some of the things I used to order and I’ve switched to other lower-calorie items. 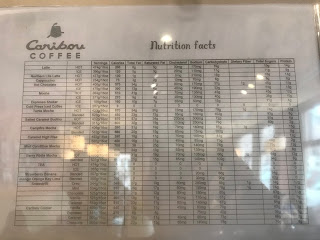 There are still some challenges with the new rules that the Ministry should issue clarification on. One place gave the nutrition information ‘per 100 grams’, but then doesn’t tell you the weight of the sandwich or muffin. Why not just tell you how many calories are in the entire sandwich? Another cafe displayed calories counts of around 220-280 for most of their sandwiches, I’m a bit skeptical about that and I’m betting that’s for ½ a sandwich or per 100 grams or something like that. The Ministry should tighten the guidelines on this and just tell you the calories in the entire item.

And as far as I can tell it’s only cafes that have been displaying the nutritional information. In the past few weeks I’ve been to three restaurants that I frequent and so far none of them have changed the menus to display the calories. Maybe they have a longer time to phase it in, or maybe it’s optional. Nandos just announced updated menus, hopefully others will follow suit shortly. [update: apparently the rules are different for franchise restaurants vs single-owned places]

The next step would be more education around nutrition. Qataris and other Gulf Arabs have some of the highest obesity rates in the world so need to be more mindful about calories, salt and other issues around food nutrition. Telling someone a meal is 1000 calories doesn’t mean much if you don’t know how many calories you should be eating in a day.

Posted by Glen McKay at 3:21 AM No comments:

A long time ago on this blog I noted one of the things that, to this day, I have still not gotten used to, which is seeing children jumping around in a moving vehicle because they are not wearing seatbelts or being in a child safety seat. It’s jarring. I guess it’s because in Canada they are pretty strict about this so the thought of driving around without a seatbelt is just weird to me. But to let kids roam around in a moving car? I don’t think that’s been allowed in Canada since the 1970s.

In Qatar the law is that you only have to wear seatbelts when sitting in the front seats. No requirements if you’re in the back, no requirements to use child safety seats. If I’m in the back of a friend’s car I’ll always wear a seatbelt, it’s just habit so I don’t even think about it, but occasionally someone points it out. Everyone is used to not wearing one so it’s odd to them that I do. But I am an outlier, a recent study published in the UAE noted that only 1 in 8 people wear a seatbelt when in the rear seats – and in the UAE, unlike Qatar, the law requires seatbelt use.

In Qatar the lack of a law for rear seatbelts is having the results that you would expect, lots of children suffering injuries when involved in a traffic accidents.

It’s a positive step but I’m hesitant to call it a victory just yet:

–- It’s a plan to change the law. That doesn’t mean it’s final or that it is guaranteed to happen.

–- There was no timetable for when the law would change. It could be this year, could be much later.

–- If the law is changed then it is up to how well it is enforced. If you look at the above link discussing the UAE they have laws requiring rear seatbelt use but everyone is ignoring it. The news article calls for better enforcement of the law to ensure people are complying. A similar situation is going to happen here is Qatar, without significant monitoring and enforcement the law will be ignored and few people will change.


I’m glad that there is a push to change the law in Qatar, and I hope it comes about soon.