Over the last couple of weeks the number of cases started increasing and community transmission is now at over 300 a day, remember a couple of months back it was just under 100 a day. Along with the increase in cases has been a slow and steady increase in hospitalizations and ICU admissions. The Government held a press conference last Thursday and everyone was watching, the rumour was there would be some sort of restrictions put back in place, so everyone wanted to know what the Government would say. That there were rumours of restrictions were not far-fetched, a couple of days previously Bahrain closed schools and in-restaurant dining for three weeks, and the UAE has started to reintroduce restrictions as well. At the presser the Government did not announce any new restrictions but from what my friends told me the message to everyone was to essentially "get their act together" or more restrictions would be put in place. 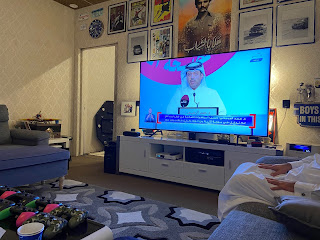 I have registered for the vaccine but haven't heard anything yet. When I get called will really depend on when and how much vaccine Qatar gets in future shipments. I am hoping within a month but who knows.

Not that I will be travelling anytime soon, countries are increasing lockdowns. Canada implemented mandatory hotel stays for people entering the country and the UK has been banning flights from certain countries, including the UAE. Not a month ago the UAE was on the UK's safe travel list and now planes aren't even allowed to fly between the UK and UAE. Goes to show how things can change in a heartbeat. And now there's that new COVID variant in Brazil which is causing concern.

So I think I will need to be more careful for the next while and hope this all passes.

Community transmission is still at ~150-170 a day, worse than a month ago but it seems to have levelled off and thankfully is not getting any worse. I was shocked to see what was happening in the UAE, I think in December they got some sort of safe travel designation from the UK, so people could go from the UK to the UAE and return without going into quarantine. Now the UAE is reporting 3,000+ cases of COVID a day! On a per-capita basis that's around six to seven times more than Qatar! The UK has since dropped them from the safe travel designation and now UK travelers have to quarantine. The UAE is now reporting 4-6 deaths a day and I expect it will get worse in the coming weeks. Good thing Qatar did not lessen travel restrictions. In fact the quarantine-hotel restrictions have been extended until May. I'm not sure if that applies if you get vaccinated though.

As for the vaccine Qatar has now lowered the age to get the vaccine to 60. The Ministry of Health has also started an online registration process for everyone else, you can register and when they have vaccine available for you they will contact you. I figure when the next shipment arrives I will be able to get my first dose, I just don't know when that will be.

People have been making travel plans in anticipation of being vaccinated but I haven't really thought of that yet. It'll be at least a month from when I receive the first dose before I can travel so we are looking at April or maybe even May. Got time to sort out what to do.

The opening of the border with Saudi has not appeared to create much of a change in Qatar. Many Qataris went into Saudi to visit relatives, property they had left behind, go to Mecca, but not a lot of people coming into Qatar, I assume because they would have to quarantine first. Qataris I spoke to are a bit cautious about the developments, they welcome it but at the same time most have no plans to visit the blockading countries for a while yet, especially the UAE, who they especially do not trust. From word of mouth I heard that Qataris who have gone to Saudi have not experienced any troubles. I haven't heard of anyone going to Bahrain or Egypt yet.

Flights are now available to the blockading countries (maybe not Bahrain yet but that will be soon), which is great news. I have Bahraini friends and for them to get to Bahrain, normally a 25-minute flight, would take 5-8 hours as they had to go to Kuwait or Oman first then board a flight to Bahrain from there. It was also WAY more expensive to do that, typically triple the price of the Doha-Bahrain flight, or more!

And finally everyone is waiting with baited breath to see what other craziness is going to happen out of the USA. I mean, if what is happening there was a Hollywood script it would be rejected as being too outlandish and unrealistic.

Posted by Glen McKay at 6:49 AM No comments:

The Blockade has Ended! (Yes, things happened elsewhere in the World aside from the USA)

So . . . did anyone hear that on January 5th the GCC met in Saudi Arabia and signed an agreement to end the blockade of Qatar? You didn't?! I guess it got buried in page 20 of the newspapers, you know, after the stories about the Democrats winning the Senate elections and the President unleashing a mob of "Y'all Qaeda" terrorists on the Capitol Building in Washington.

America is truly the World's "crazy-ex". Constant drama, and even when you want to ignore them and have them out of your life they get you caught up in all the craziness and you can't look away. Everything. Must. Have. Drama.   America can't seem to do things like normal countries.

Anyway, the blockade is over after three-and-a-half years. The borders will reopen, Qatar Airways can fly over Saudi airspace again, flights between the countries will commence shortly. It is not the end of the matter, the agreement was the 'good faith' step to get the countries to complete negotiations to resolve other issues. The blockading countries had 13 demands at the start of this situation and so far Qatar has not done any of them. Zero. So let's see where this goes from here.

I said I would avoid malls and restaurants for a while due to COVID cases ticking up in Qatar but then I realized if Qatar opens the border then thousands of Saudis could potentially flood in. Saudi Arabia has pretty much given up on COVID testing, every day they report around 100 cases of COVID, yet around 10 people die every day, which is more indicative of 3000+ cases a day. Basically there is tons of undetected COVID going around Saudi Arabia. So I went to the grocery store and stocked up on a few things, hopefully that'll be it until I get vaccinated. Then I found out the Qatar Government had already thought about this as well and stated that anyone crossing the border from Saudi Arabia would need to be quarantined for a week. Great news for keeping COVID down in Qatar, bad news for the tourism industry who I am sure were gearing up for an influx of Saudi tourists.

Local community transmission is still over 100 a day so that slight uptick continues. It looks like other GCC countries like Bahrain are seeing big increases, and it's possible a third wave is on the horizon. I think Qatar's measures will at least keep that more-contagious UK strain out of the country, others in the region might not be so lucky.

Posted by Glen McKay at 4:23 AM No comments:

After the months of slow decline in the number of cases my worries have come true and the case rate is increasing again. Now the daily cases is around 200 a day, with 120-160 being community transmission. The recoveries are around 100-120 a day so the number of active cases is growing. That will likely mean deaths will start to rise.

So is the case rate increase due to the National Day celebrations? Possibly not but the timing seems about right as the increase started 10 days or so after National Day. However Qatari friends of mine have also said that wedding celebrations are happening again so a lot of socializing is occurring there, and is a likely source of cases. I'm guessing the announcement of a vaccine has been making people lax about precautions as well.

I'll hold my hands up on this one -- in the last two weeks I attended two weddings. One was essentially held in a covered porch area so was effectively outside, the other was indoors, most people wore masks and my friends and I arrived early so we would not be with crowds of people, and left after 20 minutes. Hopefully there aren't any more invites, with the case increases I would be nervous attending any more. Have only been to a shop once in the last two weeks and that was a pharmacy so I have been careful in that regards,

Today the Ministry of Health announced that they were lowering the age for vaccine access, from 70+ to 65+. You have to book an appointment but anyone 65 and older can get the vaccine now. That's good news, hopefully a second batch arrives soon so more people can get the vaccine. I'm booking an appointment as soon as I can. Apparently it is two doses, taken 2-3 weeks apart, and you would not be deemed safe to travel until a week after your second dose, so I would have a month from my first dose until I am successfully vaccinated. I am hopeful by March I can get the first dose.

Hopefully in a few months Qatar will be generally free of COVID and life returns to normal. Qatar has done really well so far given there was no second wave.  Remember how for many months Qatar had the highest per capita case rate in the world? Now, if Qatar was a US State, Qatar would be 42nd for per capita cases, and last for the death rate (by far, it's not even close to the death rate in other States). Qatar has had 245 deaths so far during the pandemic, and a few days ago the State of Kansas (roughly the same population) had 193 deaths -- in one day! That is frightening to think about.

Posted by Glen McKay at 8:39 AM No comments: