Today it rained. Hooboy, did it ever rain.

I was woken up around 9am to the sounds of thunder.  It wasn't that far way either, as best as I could figure it was maybe a couple of kilometres.  The rain was light at first but quickly got more intense.  By the time I went outside the lightning was directly overhead and the thunder was so loud it almost hurt my ears. I took a couple of pictures of the usual lake that formed in the area outside my building then went back inside to unplug things. I figured for sure that the lightning was going to knock out the power.  It's a good thing that I live on a lower floor so I don't have to worry about taking an elevator to get to my apartment.  For people living in high rises it must be a bit of a worry, if the power gets cut it's not easy climbing 20-40 flights of stairs.

I had not seen rain this bad in years. I could see from my window that a nearby store was flooding as staff were busy pushing water out the front door. They weren't in the "lake" so it's likely that rain was leaking through the ceiling and onto the floor, a common problem in a part of the world where heavy rain is rare.

Then I remembered that my car was parked on the street -- if the rains continued it would likely be flooded.  So I changed into my bathing suit, put on some flip-flops, and went out into the rain, wading through the street to my car.  I got there in time, the water was maybe 12-15 cm deep around my car, and moved my car to some higher ground. My estimate is that some parts of the "lake" the street had become was maybe 25-30 cm deep. 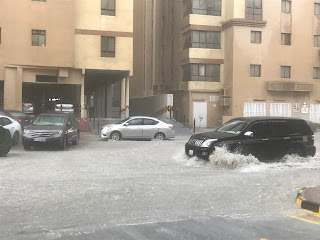 When I got back I checked social media.  Naturally it was going crazy with people posting pictures and videos of the rain and flooding. Some of the major roads were heavily affected, and in some neighbourhoods flooding was so bad it had swamped cars. Some underpasses were impassable. Areas of the desert also turned into ponds, the soil in Qatar does not absorb water well so when there is heavy rain the water tends to collect on top.

There was nothing left to do but sit around the apartment and keep myself busy.  The power never did go out but I did not want to take any chances so I left everything off, there was plenty of light from the windows to see by. By 3pm or so everything had calmed down so all that was left for the city to do is deal with the flooded areas. It'll take a couple of days to get all the water drained (they'll use water trucks to pump/collect the water if there are no drains.)

The rains arrived early this year and with a bang.  Hopefully that's the only heavy rainstorm we will get, Doha does not cope well with big storms.