Rain -- with a Vengance!

Well it rained again yesterday but this time it was a good soaking, a thunderstorm that lasted around 20-30 minutes with heavy rain. Naturally the city was flooded, with low-lying areas collecting the water in large pools. Drainage in Doha is not great, and the land is mostly hard rock with a bit of muddy sand on top so the water doesn't have anywhere to go. So there were plenty of massive puddles: 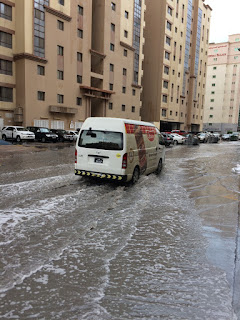 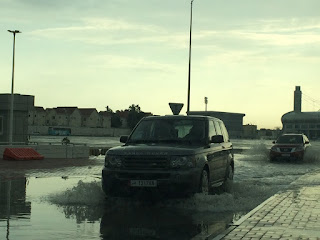 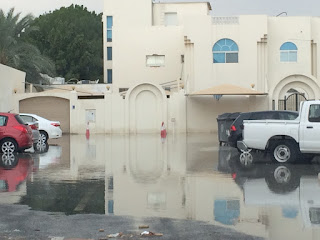 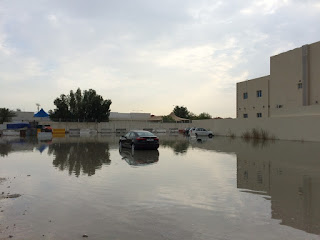 I'm used to it now, this happens every major rainstorm. Social media was lit with plenty of people sharing photos and videos of harder hit areas, where it was essentially flooded. Even saw some cars floating in the water in one of the videos. There was also flooding at some of the malls as water leaked from the ceiling, something that also seems to happen every year.

Well then things got crazy. Today there was another huge thunderstorm. I was driving when it happened and the rain was so heavy I had to pull into a parking lot and wait out the storm in my car. Even with the wipers at their fastest speed I was struggling to see through the torrential rain. The streets were turning into rivers. 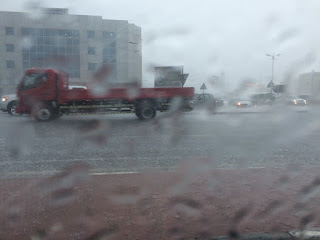 It stopped after 20 minutes but given the flooding from yesterday it just compounded the problem. This time there was some shocking videos going around social media of water pouring from the ceiling of a hospital or clinic, like a small waterfall. I hope they didn't have any expensive medical equipment ruined. Low-lying areas were flooded even more so I'm sure some homes have water in them now.

Not a lot that can be done, it would cost billions of dollars and major construction headaches to upgrade the drainage across the city. Not worth it for the occasional storm.

The Rainy Season has Begun

Tonight it rained a little! First time in 6 months or so. A 6-month gap between rain is actually pretty good for Qatar. Having rain in late November is pretty standard, just this year the rains lasted longer than I remember, I think in May it rained, usually it stops around March-April.

Now whether it rained a little or a lot seemed dependent on which neighbourhood you were in so the rain was somewhat isolated. I was out in Soudan when it started and it rained pretty good for maybe 10 minutes then stopped. After an hour or so it was mostly evaporated. But then I went to another neighbourhood on an errand and the place had minor flooding, with huge puddles in low-lying areas of the street. Weird. Where I live the rain must have been heavier as well, lots of big puddles.

At least it means the biting heat will end and winter is upon us. The daytime temperature will probably drop to the mid-20s over the next couple of weeks. I just hope the rain is spread out so we don't have the flooding problems that always occur when Qatar receives a lot of rain in a short time.


Yes, soccer. I'm Canadian dang it and that’s what we call it.

One criticism some had about Qatar winning the right to host the 2022 World Cup was that it was not a “soccer nation” with a long history of success in the sport. It's definitely true that the country has not had a history of soccer success but bear in mind two things:

1) Qatar is a small country. Right now there are probably less than 300,000 citizens.

2) Wealth was a fairly recent phenomenon to the country. The first schools and hospitals were built in the 1950s, oil wealth didn't begin to really impact the country until the 1980s. There were little in the way of modern soccer facilities until then.

Nowadays many of the soccer players on the national team were originally from other countries, something the country wouldn't have been able to afford until the last couple of decades.

As for the people living here soccer is a popular pastime and one of the most popular sports. While the local league struggles with attendance (click on my “Qatar Football League” link on the right bar to get an idea) Qataris love following big European clubs, especially in the English Premier League. Big matches such as Champions League are widely followed. It's not something that I really follow myself but I do know many Qataris who love to follow soccer.

As for casual playing it's probably more popular than you'd realize given the imposing climate for most of the year, and what should be a lack of green space since the country is entirely desert. If you go to many of the stadiums there are usually other fields nearby that people can play on (such as the Al-Sadd Stadium, Qatar Sports Club or Lekhwiya). There are also areas with fields for “small soccer”. I know Al Sadd Stadium has some and I think there’s some in Markhiya as well.

Which brings me to why the heck I'm posting about soccer now. Last weekend some of my friends invited me out to practice some soccer, kicking the ball around and so forth. Now I know it sounds stereotypical but, as a Canadian, I didn't even really know how to play -- not the rules but how to actually run with the ball, kick the ball, defend etc. No skills. I think the last time I had kicked a soccer ball was in middle school and as I was never the athletic type it was something I didn't play outside of gym class. Soccer was more of a casual sport in Canada, something to do in the summer if you weren’t into street hockey. The sport is becoming more popular in Canada now but it still doesn't have anywhere near the same popularity as hockey or football.

So we went out onto a field, did a bit of jogging to warm up, and the guys started giving me tips as to how to kick the ball properly. We started passing the ball around back and forth, I wound up for a big kick to pass it to a friend farther down the field . . .

… and felt a sharp shocking pain in my upper leg. I had pulled a quad muscle kicking the ball.

Why hadn't anyone told me that could happen? We didn't even warm up our quads before playing. I hadn’t played for five minutes.

So I hobbled over to the bench and sat there with my leg aching. Spent the next couple of days resting and icing it and walking with a limp. It was a struggle to put socks and shoes on. Thankfully I think it was just a Level 1 sprain (there's levels for this, who knew?) because after 3 days I’d say it’s at around 80% now. Still a bit of pain if I move the leg up too much.

I think that was a hint that while soccer might be for Qataris it’s probably not for me. I might stick to squash and tennis.

Sorry everyone for not posting for a while. With the weather finally cooling down the evenings have been busy as everybody is out doing things. This week was soccer, dinners out, squash, and hanging out at majlises (except outside). The months of repressive heat is over, and the rains haven't started yet, so now it's time to enjoy the evenings while you can.

I'll try to post an update in a few days.
Posted by Glen McKay at 11:11 AM No comments: