I was at the W Hotel meeting some friends when their daughter pointed to a sign about an art exhibit on the top floor about the "Glory to Tamim" illustration (I spoke about it in a blog post here).

So we went up and the top floor had been turned into an art gallery, featuring the work of Ahmed Al Maadheed, the Qatari artist who created the illustration of Sheikh Tamim that has now been a rallying image for people across the country. Or at least I thought it was an illustration, it turns out that it is a painting and the original is on display at the gallery. 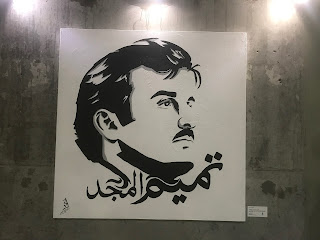 There were also a number of other works by Mr. Al Maadheed, including portraits of previous Emirs as well as more cultural themes such as falconry. 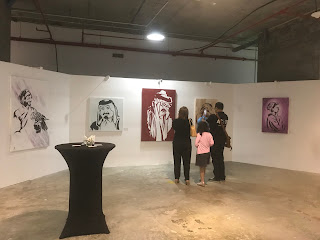 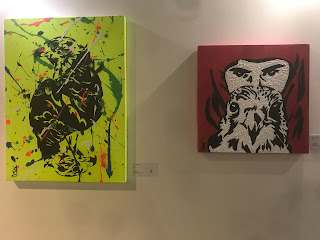 As well as a portrait of Turkish President Erdogan, probably painted recently when Turkey backed Qatar in this current political crisis: 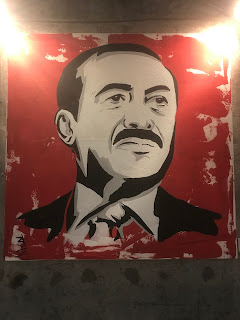 The paintings will be on display until September. It's amazing how events can change ones life, in just a few weeks Mr. Al Maadheed became one of Qatar's most famous artists. His portrait of Sheikh Tamim is now priceless to the people of Qatar. 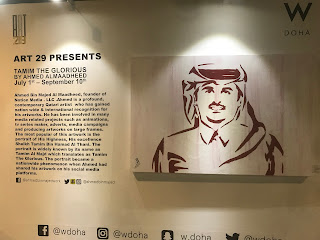 Posted by Glen McKay at 4:59 AM No comments:

I've been away on vacation this Eid (I'll post about that later) but I'm back in Doha in time to wish everyone a Happy Canada Day. Canada is 150 years old today, while it was a series of colonies going back to the 1600s it was not an official nation until 1867.

With it being both the summer and Eid there was not much happening here. Most Western expats were away on vacation and with the universities finished until after the summer a lot of Canadians (such as the people working here at the College of the North Atlantic) left a couple of weeks ago. Because of this some celebrated early, and I was at a Canada Day party on June 15th that was hosted by a friend.

One of my Qatari friends went to university in Canada and really fell in love with the country so suggested that today we all meet at a majlis and he'll make poutine for the occasion. We didn't get back from vacation until 2am this morning so we were all too beat to meet up tonight but maybe this weekend we'll try it. Today was just resting and recovering.