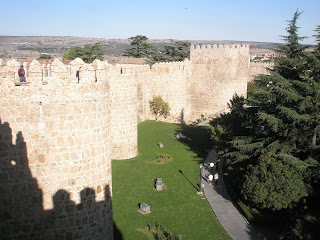 The walls of Avila. The walled city is in an excellent state of preservation and it was cool to walk atop the walls. Try the local delicacy - a veal steak.
Posted by Glen McKay at 11:47 PM No comments:

Now in Salamanca, which in many ways is even nicer than Segovia (though the castle at Segovia has no equal in Salamanca).

Posted by Glen McKay at 8:36 AM No comments:

Currently on vacation. Where? Well, my hotel has a small garden with a view of this.

Go visit if you get a chance.


There have been a couple of recent articles that tie in nicely to my discussion on traffic.

Now go back to my previous post. The difference in travel time for me between light traffic and rush-hour appears to be more around 50%+. Granted, we are using a low base here since in light traffic I can get to work in 10-15 minutes. But I know that for people living farther away, such as Al Waab, to get to West Bay in light traffic would probably be 20-25 minutes. At peak times it’s about an hour (150-200% increase). There is no way for your average commuter it would only be a 34% increase in time during peak hours, that would be the equivalent of a “light traffic” 30 minute drive taking 40 minutes. Not a chance that in Doha your delay is that short during rush hour if you are going to West Bay, C-ring road or Grand Hamad Street.

Los Angeles the worst at 34%? That would be wonderful to have here.

I hope the Government is developing some short-term solutions because anyone hoping on the Metro to relieve traffic congestion will be waiting a long time. A big announcement was made about breaking the ground on the building of one of the stations. The plan is for phase 1 to be operational by fourth quarter of 2019. And phase 1 is only from the new airport along the Corniche to Lusail so it won't do much to alleviate traffic in much of the city. That will need to wait until phases 2 and 3 are complete, probably in 2020 or 2021.

If anyone has some solutions let the Government know.

Posted by Glen McKay at 9:56 AM No comments:


Coming back to work after my lengthy illness something became quickly apparent -- the morning rush hour had gotten substantially worse. Rush hour is much lighter in the summer when many people are on vacation and the schools are out but the difference between early 2012 and now is incredible.

For me to get from my apartment to the office:

I'm not sure how such an increase to the commute occurred just over the summer but it is what it is. I spoke to work colleagues and the stories are similar. One of my colleagues lives on Al Waab Street and it takes him over an hour to get to work now.

Coincidentally there was an “Intelligent Transport System and Road Safety Forum” in Qatar this week which I believe is developing both short and long-term solutions for the traffic issue. A recent article in the newspaper had some surprising facts:

1) Qatar’s population on December 31, 2002, was 616,718, while according to the latest figures released by the Qatar Statistics Authority, the country had more than 1.84mn residents at the end of September 2012.

So in the last 10 years the population of the country has tripled! And the statistics for the number of vehicles only goes to 2010, if I extrapolate based on the average growth per the last 10 years I estimate there are around 730,000 vehicles now.

I don't envy the Government Minister who had to try to ensure infrastructure kept up with a tripling of your population in 10 years. It would be a challenge that almost no municipality or country has ever gone through (I think Dubai has as well but offhand I can't think of any others).

Traffic is getting worse and worse but it's not like the Government has done nothing: converted many roundabouts to intersections, the Shammal highway/freeway opened, Salwa road is being converted to underpasses and intersections, but unfortunately the changes to the road system are not keeping pace with the growth.

West Bay, however, is a special problem. 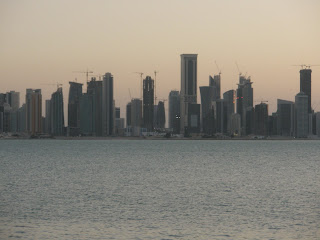 I recommend people go to Google Earth and find West Bay. Google Earth allows you to look at snapshots from the past so you can see West Bay as it looked all the way back in 2003. At that time there was City Center Mall, the Sheraton, The Four Seasons, and a smattering of small office towers but 80% of the land was sand. At that time there were three roads to get into West Bay:

• the Corniche,
• the Al Bidda road (about 100 m back and parallel to the Corniche), and
• the road from Arch Roundabout.

Nine lanes of road for traffic to enter the neighborhood.

Since then the neighborhood has grown to dozens and dozens of towers and by my rough estimate around 12,000+ people work in the office towers and hotels there, commuting in every weekday. And the road infrastructure to enter the neighborhood now consists of:

• the Corniche,
• the Al Bidda road (about 100 m back and parallel to the Corniche), and
• the road from Arch Roundabout.

Nine lanes of road for 12,000 commuters to enter the neighborhood. There are no additional roads being built to enter West Bay. There is no Metro or subway. Public transport to West Bay consists of two buses that run once every 20 minutes. If you work in West Bay you have little choice but to take a car.

Yet the building of office towers continues. I estimate another 6-8 office towers will open over the next 12 months adding 200+ floors of office space, and another 6-8 towers the following year (and I'm not even counting the opening of the QP district, that's around 10 towers). Why is the Government allowing more office towers to be built if the traffic infrastructure will not be able to handle the additional commuters?

The road system in West Bay is already at capacity, so even a slight increase to the number of cars has a significant impact on the commuting time (which is what I suspect is happening now). In two years time the increased traffic to West Bay will put such a strain on the system the entire thing will gridlock. People living on Al Waab Street will likely be facing commutes of around 1hr 45min. My 20-minute commute will become at least 45-50 minutes.

Immediate solutions are needed. I can only hope the Forum has developed some.

Email ThisBlogThis!Share to TwitterShare to FacebookShare to Pinterest
Labels: New to Qatar, Qatar

Well the doctors have given me the all clear to go back to work tomorrow so I figured I’d leave my self-imposed quarantine for the day. While I was off sick I heard that Villaggio Mall had reopened since the disastrous fire in late May so going there was something to keep me occupied.

Most of the mall was open but some things were still closed:

Open:
 Carrefour
 Virgin Megastore
 Movie Theatre
 Amusement Park
 About 75% of the food court
 the ice rink didn't have anyone on it when I was there but it looked like it was ready
 many of the shops in the luxury-brand area
 most of the shops in the Carrefour area

Closed:
 the entire area between Go Sport and Zara, where the fire started, has been closed to the public.
 In the canal area most of the clothing shops on the side closest to the fire area and nursery are still closed
 Dean & Deluca
 Marks & Spencer
 some of the kiosks that were in the hallways have been removed.


After wandering around I had lunch at Paul before going to get some groceries. While I was sitting there having lunch the fire alarm went off! It only rang for 5 seconds and then stopped but when it went off everyone eating lunch, myself included, all started looking around a bit nervously, waiting to see if security or someone would tell everyone to leave. Had the alarm sounded a few seconds longer I was going to drop my food and head to the exit.

Turned out nothing was the matter but gone are the days when people in Doha easily ignore fire alarms.

Posted by Glen McKay at 6:05 AM No comments: