I recently had to visit a clinic to check something out. Having medical insurance is a definite benefit in Qatar and almost all employers provide it to some degree. There is a public hospital system (generally known as Hamad but that is the name of the largest hospital, there are other public hospitals as well) but if you have insurance you can visit almost any clinic in Doha. Hamad and other public hospitals tend to be crowded.

Now most local clinics have an almost assembly-line approach. You go in, pay the fees, take a number, sit down and wait your turn, visit the doctor, maybe some tests, then get a prescription. It can be fast and at times you might be in the doctor's office for as little as five minutes, rarely longer than 15. It's not great if you were hoping for a thorough examination and discussion but it's great if you want some tests done.

This time I went to the clinic, saw the Dr., got an X-ray done, then the Dr. ordered a CAT-scan, then when I was waiting outside the CAT-scan lab for the results the Dr called the technician to make sure they scanned/focussed on a particular spot. They hadn't, so they called me back in for a second scan. The Dr. then looked at the results, and gave me prescription.

I was in the clinic for less than two-and-a-half hours.

Yep, I walked into a clinic, saw the Doctor twice, had an X-ray and two CAT-scans, all in under three hours. Pretty impressive that there was no waiting for any of the tests. Many years ago I went into clinic and had a same-day MRI done. I like that aspect of Qatar's health care system.


The quality of medical care can be hit or miss, but if after going to one of these clinics the issue doesn't seem to be improving I'll then go to one of the more expensive clinics for a second opinion, which costs more (most health insurance schemes have a larger co-pay for the top-end places, or don't have them on the network at all). I'd say maybe one time in three I go for a second review though so I always use the less-pricey place as my first stop.

If you are new to Doha, don't be put off by a clinic that looks 'old' and is not one of the fancy high-end places. You might be able to get tests done much quicker at a local private clinic, and for less money. If you're not satisfied with the diagnosis you can then take your test results to the other places for a consultation.

Posted by Glen McKay at 8:56 AM No comments:

Back again after a long delay, went on a big summer vacation and then a couple of weeks later fell ill for a few days with a stomach bug.

Unfortunately because I was away and/or ill I missed out on a few things going on in Doha:

-- The recent Hunting and Falconry exhibition, I was hoping to go to that.
-- Qatar playing a qualifying match for the 2023 Asian Games (but qualifiers are also for the 2022 World Cup but Qatar gets in automatically for that)
-- I figured the Green Line of the Metro would be open, but it's been delayed to the latter half of September 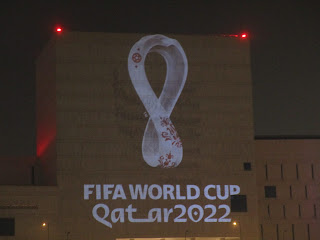 -- I did catch the unveiling of the new 2022 World Cup logo. I must admit when I first saw it I didn't quite get it. I was with a Qatari at the time and he understood how it was a shawl but he wasn't sure about the other symbolism. Once I read all about it its obvious now how it looks like the trophy. I still think a more obvious football motif incorporated into the design would have worked better, like having a football in the middle of the loop. The design, being long and slender, will make it easy to put on the sides of skyscrapers though.
-- I didn't miss the heat though, it is still over 40° in Doha. It should start to mellow out in the next couple of weeks.

I've actually been getting lazy over the years about checking out new things. Most of my evenings involve going to various friends' majlises (majlisi?) and I've also joined a gym to get exercising. I don't have a lot of spare time for things like I used to. I haven't been to the new National Library yet (was waiting for the green line to start to do that) nor the new Qatar National Museum (too hot out right now). And I think some more stuff opened recently at the Pearl but I haven't seen that either.

In time. When the weather cools down I'll head out there. I do feel bad about missing out on the Museum when it first opened.

Posted by Glen McKay at 7:12 AM No comments: