I was tidying up my apartment and came across a series of art cards. 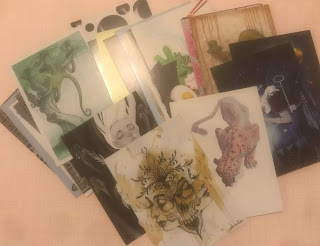 These were from a gallery exhibition in Vancouver called Carded. Every year they would invite artists to create an artwork to put on a card. Then, at the one-night only show, they would display the paintings and you could buy packs of random cards for $5. You would then go around and trade people for cards that you liked while looking at the originals. Some of the artists were there so you could chat with them as well. It was an interesting concept. I went in 2016 with my brother-in-law, as he had done a painting for the show, and bought a number of packs so I had most of the set by the end of the evening.

You can see pictures of the event here: http://hotartcard.com/category/photos/2016-photos/. I can't see my brother-in-law or I in the photos, we must have been in one of the other rooms at the time.

So what to do with the cards? I had an idea, why not mount them and use them as a poster. I don't have a lot of wall space, and a friend of mine likes artwork, so I brought the cards to him with the idea and he loved it. So we went through the cards, removing the ones with nudity (he's Qatari and doesn't want to display artwork with nudity), then gluing it on a backing-board and putting it under glass. 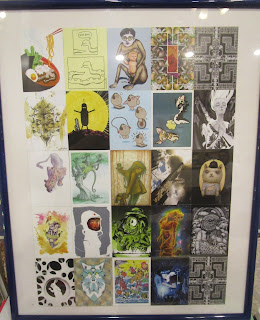 
You can see the cards from every year of Carded at hotartcard.com. I'm not sure if they do it anymore but it was a cool concept so maybe someone in your town would be interested in doing a similar event.