This last 12 months has been the Year of the New Malls. First there was the Al Hazm mall, then Mall of Qatar, then Doha Festival City, and now there's the new Tawar Mall.

The mall had opened a little while ago for the amusement area, and I'd heard that nothing else had opened there, so I waited a little bit before visiting.

It's a lot bigger than I thought it would be. It's three floors so there's a lot of space. I'd say overall it's not as big as the biggest malls like Festival City, but it's certainly got more space than Landmark.

It looks nice but at the moment very little is open. 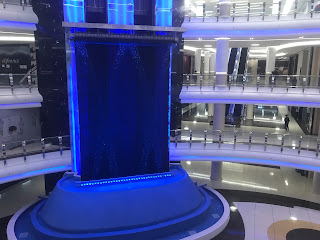 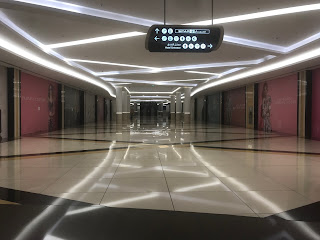 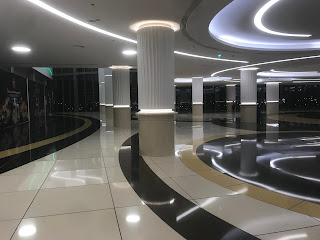 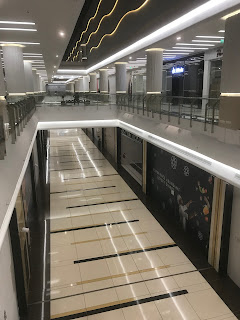 I went over to the amusement area, a trampoline park that's pretty popular at the moment. There were a few cafes and restaurants open near the trampoline park, other than that there wasn't much. 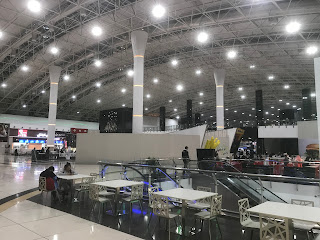 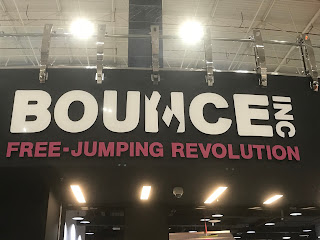 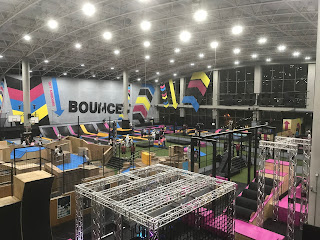 There will be an Old Souq area, which I assume will contain small traditional shops, and there will even be a hotel at some point. 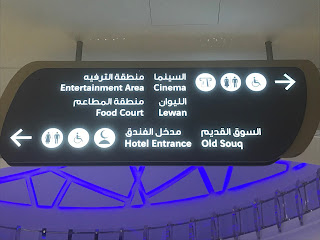 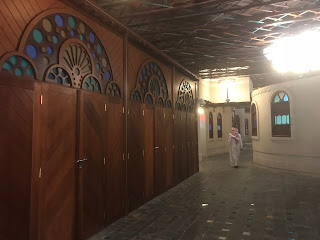 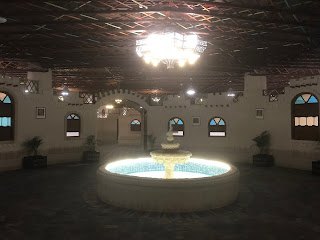 On the rooftop there's an outdoor area with a large musical fountain. 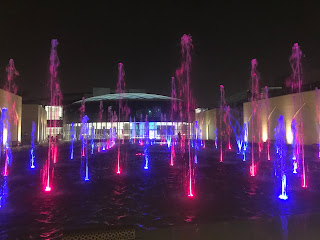 It's still pretty early days for Tawar Mall so unless you're going to the trampoline park there's not much else there for shopping. I assume in the next couple of months more things will open and it will start to get busy.
Posted by Glen McKay at 6:47 AM No comments:


Summer is almost over, there's actually clouds in the sky and the threat of rain hangs overhead. In truth I can't wait for the rain, months and months of dust and hot temperatures gets to you after a while so it'll be nice to have some clean air.

This also means it's flooding season. As usual there will suddenly be a lot of rain and then streets will flood and turn into small lakes. This time is Government is trying to prepare people for it, I've seen ads up around town, in Arabic and English, warning people about the pending rains and how to protect themselves a bit from flooding. Also I've noticed at a few intersections in town there's been work installing drains so that they won't flood. In the past the water builds up at the roundabouts and slows the traffic down, which leads to big traffic jams. It's not fun. Doha rarely receives just a bit of drizzle or a light rain, if it rains it's a lot of rain in a short period of time. 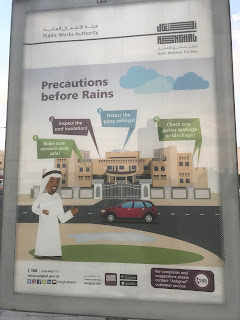 Posted by Glen McKay at 3:55 AM No comments:

Another Trip to Turkey


Just back from a weeks vacation in Turkey. It was mostly helping some friends with things so there wasn't a lot of sightseeing, instead we were jumping from government offices to banks to other government offices. It was nice to relax though.

I've been to Turkey enough now to be able to tell some differences between Turkish cuisine versus Arabic cuisine. In the past I've noted that they're very similar, and to a newbie Westerner (like me at the time) they would be, but there are some significant differences:

1) Turkish food is usually a number of small dishes put in the centre of the table or given to you individually (see the pictures below for examples) whilst in Gulf Arabic cuisine a large meal tends to be larger dishes that are shared amongst everyone, even when you are eating with your hands from a large platter. I have yet to see Turkish meals eaten with your hand, Turks prefer cutlery. 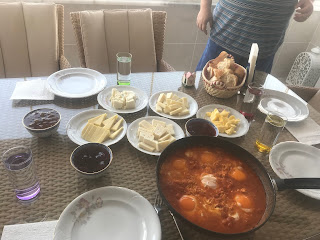 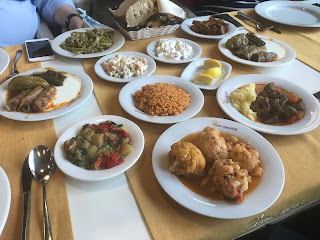 2) Turkish food tends to involve a lot more dairy products. Cheese, butter, yogurt, these are all staples of Turkish meals. I've had meals that had four different types of cheese served, individually, not including any cheese incorporated into a dish (see the picture above). Arabic food, on the other hand, does not use dairy products much. Sometimes I see yogurt served as a side with a lamb & rice platter, that you can add to the rice if you want, but otherwise Gulf Arabic food is not big on dairy. In some ways Turkish cuisine could be seen as a cross between the heavy reliance on meat in Arabic cuisine, with the abundance of dairy seen in eastern European dishes.

3) Rice (or lack thereof). Arabic food uses rice as a staple grain, Turkish food doesn't instead having loaves of bread with the meal (as opposed to a thin Arabic pita bread) is much more common. Sometimes in Turkey they serve bulgur but I don't recall any rice dishes.

4) Nuts. Both cuisines utilize nuts but Turkish cuisine seems to use nuts a lot more. If you're allergic to nuts you are really going to struggle sometimes with Turkish food, they puts nuts and seeds in a lot of things.


I'm sure there's plenty of other differences between the cuisines, not to mention all the regional differences within Turkey itself, but it's nice that I'm starting to get better at recognizing the difference.

Posted by Glen McKay at 6:54 AM No comments:

Weapon and Armour Exhibit at the Islamic Museum


For the next few months there is a special exhibit at the Museum of Islamic Art, a display of antique armour and weapons, from the private holding of a local collector. I went with a few Qatari friends as they all like antique weapons. 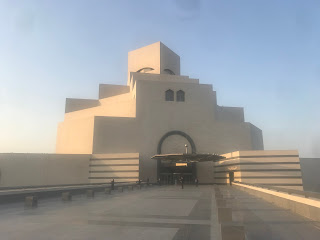 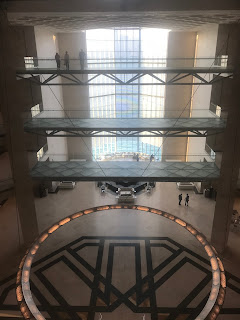 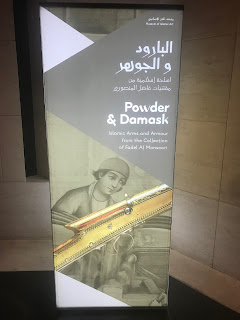 Most of the items are Turkish, Persian or Central Asian, showing the various types of weapons used over the centuries. There was even some ceremonial items which were inlaid with precious materials, not necessarily meant for battle but were typically given as gifts to important persons. 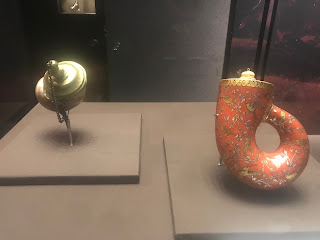 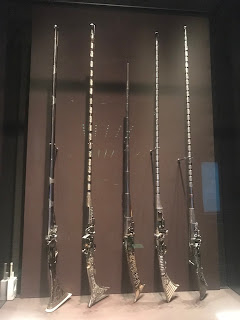 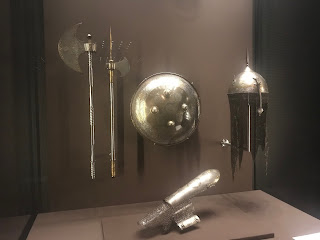 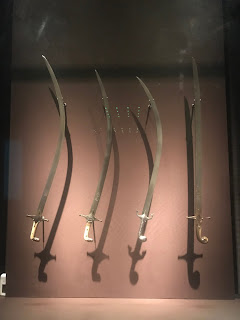 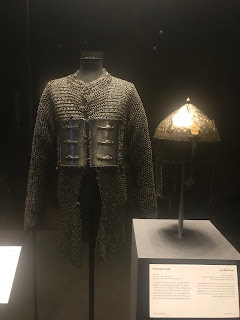 Entrance to the exhibit is free, it's on the fourth floor of the Museum. There's also two rooms with short film presentations discussing the items and the history. The items were really cool so if you get a chance stop by the Museum.

And if you haven't ever been to the Museum, why haven't you? It's really worth a visit. One of my friends hadn't been before and he was really impressed. He'll be back again with his family to see the Museum and let his kids play in the park.