The Hot Weather Is Finally Subsiding


Went out for a walk last night to Souq Waqif and the park at the Museum of Islamic Art. The weather has cooled down enough that a walk in the evening is actually quite pleasant now, and it looks like everyone else in Doha has the same idea. The park was packed with families having picnics on the grass or playing in the playground. The museum was not open as it was evening but the parking lot was full, not a space to be found. By 9 o’clock security at the front gate were turning away cars because there was no parking, bear that in mind if you plan to go with your family. 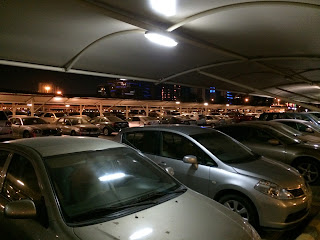 I'm really glad that people are starting to enjoy the park at the Museum. In the past it seemed to not be used much, which I thought was a real waste as it was a beautiful property that the Government spent a lot of money for the grass and amenities. Well it's definitely getting used now. Hundreds of people were there.

Souq Waqif was also packed and it was difficult to get a table at the restaurants on what I call “Restaurant Row”. Went to one of my usual places (Saida) and even inside most of the tables were occupied, which never happens in the summer.

The evenings are pleasant now Doha, get out there.

Posted by Glen McKay at 2:28 AM No comments:

Advice for People Looking for Work in Doha


The other day I was having a coffee and looking through the local newspaper and happened to come across the "Situation Wanted" section of the classifieds. It's where people post little classified ads about their background in the hopes of finding a job. This section went for over five pages! Wow, when did that happen? It didn't seem all that long ago it was maybe a page and a half. I guess as Qatar continues to grow and is spending all the money on infrastructure projects and 2022 World Cup preparation it's attracting more and more people from poorer surrounding countries looking for work.

When I was in Turkey a couple weeks ago I was chatting with someone about the rents here and they couldn't believe how expensive it was to rent a place in Qatar. Compared to places like Turkey or Iraq unless you were in the big city rents in Qatar were something like 8-10x what they were in those other countries. I explained to them that’s why people need to be careful when they get offered a job in Qatar as the wage might look good to someone from a poor country but when they actually arrive here they realize it's nowhere near enough to save money, or even live for that matter.

So it's important when you get a job offer to determine whether the money you are being offered includes an allowance for housing or whether the employer will be providing you with accommodation. I kid you not you will struggle to find a one bedroom apartment for less than QAR 5000 ($US 1,370) a month right now and that's unlikely to be of good quality. A decent place in the city can be upwards of QAR 7000 ($US 1,920) a month and if you want to live in the luxury areas like the Pearl or West Bay you’ll probably be paying QAR 9000 ($US 2,460) a month, or more, for a one-bedroom apartment. On Internet forums where people post salary offers to see if people think they're a good offer usually the first question is, "is accommodation provided"? If you get a job offer for QAR 8,000 a month it makes a huge difference whether you are paying for rent out of your own pocket or the employer is providing accommodation.

You will need to look into transport as well. Will your employer be providing transport to and from work? If not then you'll need a car or some way to get to work. Taking the bus really isn't an option and cycling isn't an option for most of the year due to the heat so if you don't have your own car then you will have to pay for taxis every time. Will you be able to afford car payments of QAR 1500-2000 a month?

Qatar is ex-pen-sive, be careful about researching the cost of living before signing that job offer.


So my Turkish friend convinced me to go on a bus tour of southeast Turkey with him and his wife. They had done a similar tour around four years ago and had enjoyed it. I have to admit I was a bit skeptical, especially since the tour was for Turks thus everything would be in Turkish, but I took his advice and went along. The price was good as well (I'm going to guess that foreign tourists get charged more for similar tours).

Well the trip was a blast and I'm really glad that my friend convinced me to go. We met all sorts of great people on the tour and had a lot of fun. As expected I was the only person in the group who did not speak Turkish but some of the travelers could speak a little bit of English and I had brought a Turkish-English dictionary for the occasional translation. In addition, some were Iraqi Kurds who could speak both Turkish and Arabic so I got to practice my Arabic a bit. Iraqi Kurds . . . man, if I lived in the Kurdish area of Iraq right now I’d try to go on as long a vacation as possible. They didn’t say anything about the war with ISIS and I didn’t ask – I’m sure they wanted to get away from thinking about that.

Anyway, here’s a brief picture summary of what we did on the 8-day tour:


Duden waterfalls near Antalya, also did some whitewater rafting nearby. 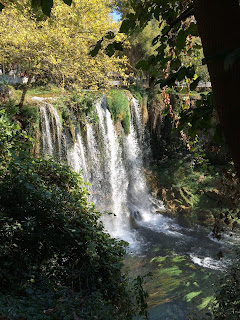 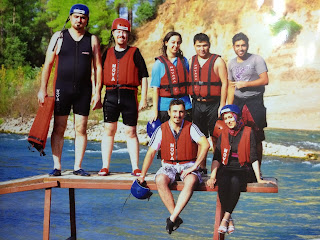 The amphitheater at Aspendos 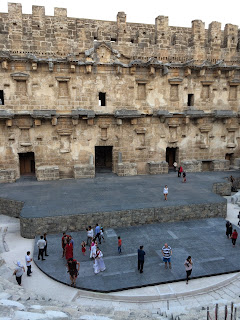 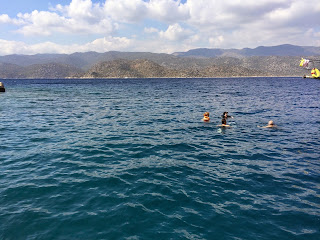 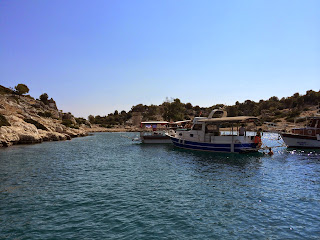 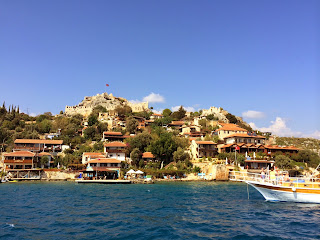 Another boat cruise the next day near Gocek, visiting some islands. 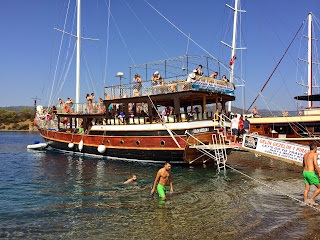 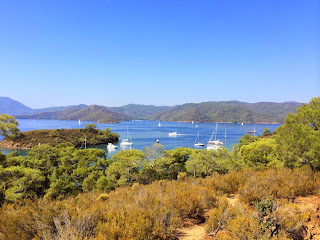 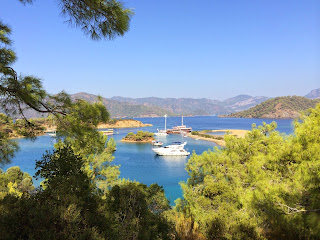 A morning at the Blue Lagoon in Oludeniz 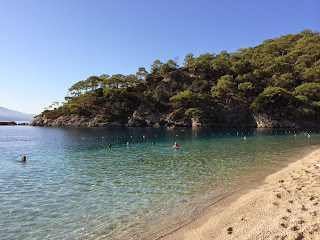 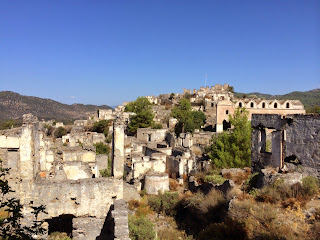 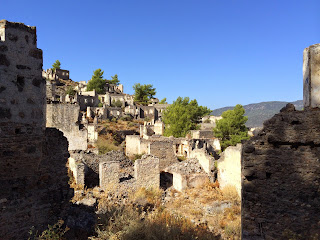 And only a trendsetter like me can pull off wearing a swimsuit with a long-sleeve shirt and non-matching cap. ;) 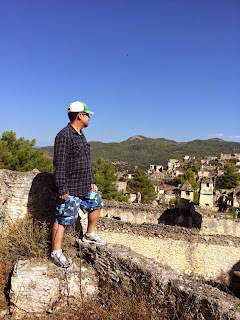 A cruise and beach visit in the Dalyan delta. 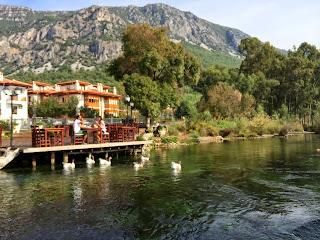 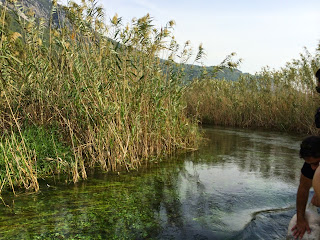 Visit to the famous beach of Cleopatra Island, as well as visiting the Greek and Roman ruins nearby. 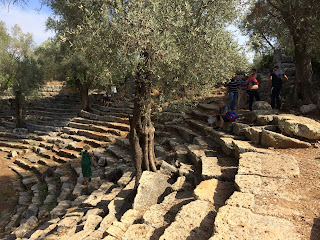 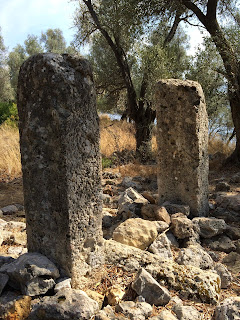 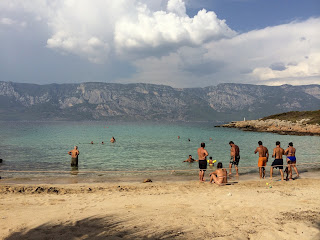 Some time relaxing in Bodrum 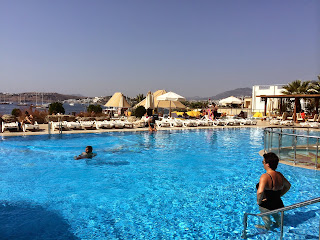 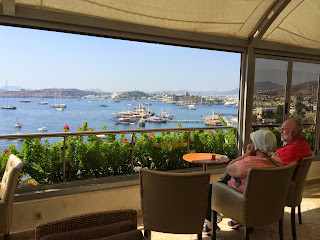 And of course occasional bursts of game playing . . . 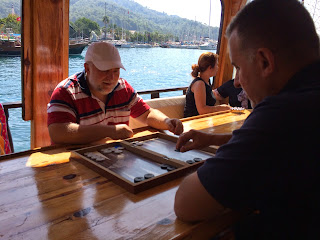 and dancing to Turkish music 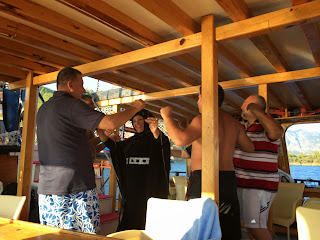 I guess it’s true what they say about travel and getting out of your comfort zone, it can be really rewarding.


Finally back from my Eid vacation. Unfortunately I couldn't update my blog enroute as I was on a bus tour so didn't have access to computers and I was struggling to access my blog using my smartphone (that's the downside to using non-alphanumeric characters).

Pretty tired right now, got home a little after 1 am. While I get settled here’s an amusing sign I saw on a boat in Turkey. For the most part Turkey does a pretty good job of translating things into English but this one was amusing. Life Jacket Is Shelf! 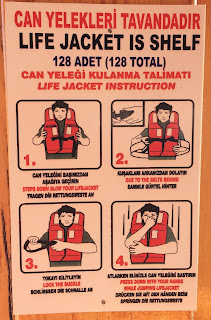 For those of you who can't quite read the instructions:

1. Steps down blow your life jacket
2. Due to the belts behind
3. Lock the buckle
4. Press down with your hands while jumping lifejacket

I'll post more updates over the week.
Posted by Glen McKay at 11:10 PM No comments:

Started my Eid vacation in Edinburgh and Glasgow. Weather has been fantastic, sunny and high-teens to low twenties. I think it's because I brought an umbrella with me so, naturally, it won't rain. That's the Murphy's Law of travel.

Despite the recent independence referendum in Scotland people have not been discussing it much. I was told there might be a lot of hard feelings so people are reluctant to discuss it lest it just lead to arguments. Maybe they're not discussing it much in touristy places, I don't know.

Anyway Edinburgh's Castle and Royal Mile were nice, also did some whiskey tastings, ate steak & ale pies, and the staff at the local dental hospital were nice too (long story, don't ask, nothing to do with the pies). Also watched a Glasgow Celtics game on the telly at a very pro-Celtic bar in a Glasgow neighbourhood called Gorbals. Bar was called the Brazen Head, apparently famous as a hotbed of Irish Republicanism. Was mellow when I was there, everyone there was just having drinks and watching the game.