Taking the Metro to the Airport 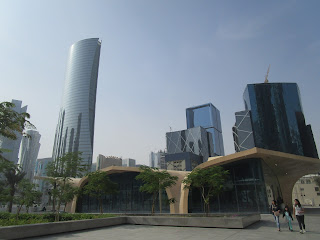 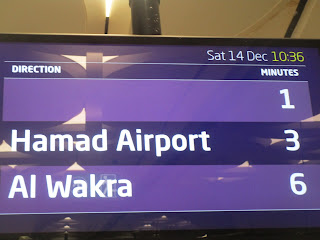 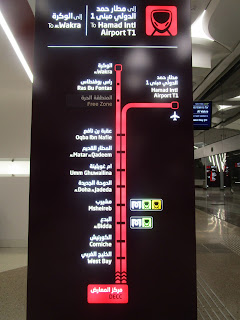 You are allowed to bring luggage on the Metro. Some people were confused about whether you could because the Dubai Metro doesn't allow you to (have they changed that rule? It's been years since I've been there.) In the Doha Metro there is space in the cars for luggage. 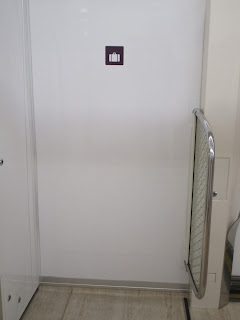 The trip to the airport is underground, which explains why I never saw a train being tested near the airport. 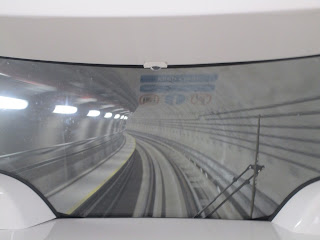 And as soon as you get past the pay gate there are carts waiting for you to place your luggage on. 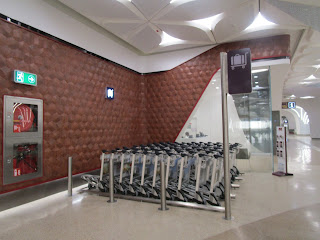 You do wind up a distance away from the airport, this picture was taken from ground level, after taking the elevator up to the surface. 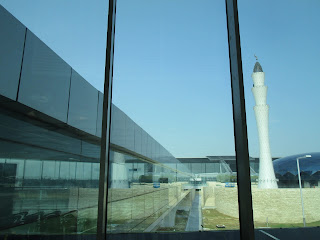 But they provide moving walkways for you to use to get you to the airport. 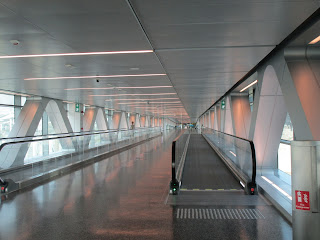 The way is entirely enclosed (thus has A/C) except for this one 20m stretch where you have to cross a road in the short-term parking lot. 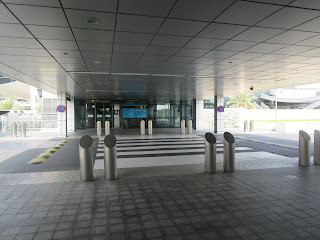 After which you're in the airport. I'd say from the train platform to the terminal is about 6-8 minutes of elevators and walking. 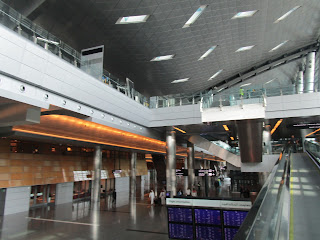 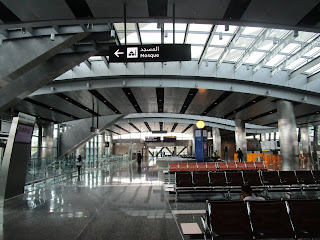 All in all it worked fine. Given that it costs QR 2 for a trip on the metro, versus QR 40-80 for a taxi, it's a total deal, unless you are travelling with a lot of luggage.


My only criticism is that at the moment (but I have heard it will change soon) the Metro starts at 6am, and the first train probably arrives at the airport around 6:35am. The busiest time for flights leaving Doha is 6:45am-9:00am, which means the Metro doesn't start early enough for most morning passengers as they should be at the airport 2-3 hours before the flight. The Metro will need to start earlier, I have heard a 5am start may happen soon, but I hope that eventually it starts even earlier.

Posted by Glen McKay at 8:02 AM No comments:

The Passing of Sultan Qaboos of Oman

I was saddened to hear of the passing of Sultan Qaboos of Oman this weekend. Everyone knew he wasn't doing well, after a number of medical troubles in the last few years he cut short hospital treatment in Belgium to return to Oman, leading most to suspect that he had a terminal illness and it was only a matter of time.

I happened to be in Oman for the New Year's weekend with friends and the front page of all local newspapers were covering palace announcements about his health (at the time he was stable). The Sultan was 79 and had ruled Oman for almost 50 years.

I don't think most Westerners would understand what the Sultan managed to accomplish for his people during his reign. The Sultan's father was xenophobic and rejected "modern" things like technology, isolating the country and not developing it despite the wealth from oil coming in. When Qaboos deposed his father in 1970 the country was almost completely undeveloped: if you weren't in the capital chances are you had no access to paved roads, schools, hospitals, even electricity. Illiteracy was high, and many people were suffering/dying of preventable diseases. Sultan Qaboos immediately changed that, using the money from oil to develop the country, including rural areas and villages. He was known for touring the country with Government Ministers, seeing the changes and meeting with villagers to discuss their problems and what work needed to be done. Sure the Sultan had some lavish tastes as well, he didn't live as a pauper (he especially loved fine yachts) but it is stunning how much he used the country's wealth for development and helping the people. If you do a search of the internet or Youtube you can find some films/writings about what it was like in Oman before Qaboos took over, or in the early part of his reign. Compare that with today, the country is truly modern. The new airport is stunning. The cities and architecture are great. University education is common. Traffic jams are a common annoyance in Muscat now. The infrastructure is up-to-date. Luxury hotels and resorts are in Muscat and even up in the mountains. You would have never thought that 50 years ago there was very little. If you do get a chance try to travel to Oman, it really is a lovely country, and I have stated on my blog more than once it's my favourite country in the Middle East to visit.

I'm not sure how the Omani people are coping with the news. Most Omanis have never had another Sultan. I think it will be tougher for the older Omanis; younger Omanis are used to the modernization and maybe do not realize just how much the Sultan changed things. Older Omanis would have lived through the transformation and know what the Sultan did for the people.

Sultan Qaboos did not have any sons, nor did he have brothers, and there was no official successor. Qaboos decreed that after his death the Royal Family had three days to decide on a successor, if they could not decide then a sealed envelope would be opened, which contained Qaboos's choice for who should succeed him. Media in Oman reported that the Royal Family decided instead to respect Qaboos's choice, declaring that it would not decide on a successor and instead open the envelope. Thus Qaboos's cousin Haitham bin Tariq has become Sultan. I think the Royal Family was wise to use the envelope -- Qaboos was greatly revered and people would always speculate about what his wishes were. Going with Qaboos's choice will allow for a smooth transition of power.

Best wishes to Oman and its people in this difficult time.