I’m here visiting family and friends. Weather has been grey and rainy, which shouldn’t surprise anyone who has been to Vancouver in the winter as this is the normal weather for this time of year. I think the whole time I’ve been here it’s been anywhere from drizzling to pouring but never sunny. Would you believe I love it? Months in the dusty, hot desert of Qatar really makes me miss the cold weather and the snow and rain. That's why I love going back to Canada during the winter. 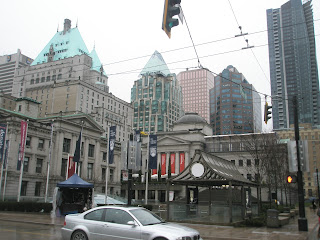 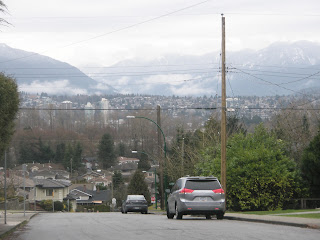 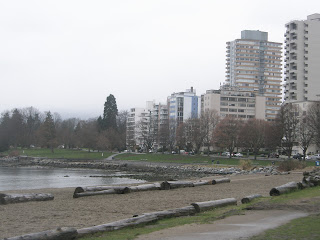 Also managed to catch an Art Spiegelman exhibition at the Vancouver Art Gallery. I love his work (his most famous comic? Maus) but it was great to see his stuff from the early years and his New Yorker cover art. 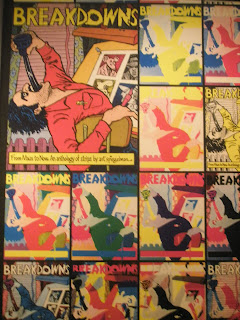 I love all the eating out too, Vancouver has great restaurants. Been eating sushi, steak, Ukrainian food, even some Mexican. I guess I’d better start losing weight when I get home.

Posted by Glen McKay at 9:59 PM No comments:

Leaving Calgary and heading to Vancouver, here's a parting picture of the prairies. 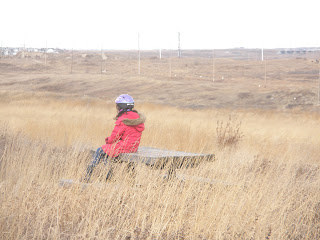 
My sister-in-law managed to get tickets to a Calgary Flames game so we went last night. I love hockey so it’s always great to be able to see an NHL game. Tickets can be hard to come by, especially for top teams like Vancouver.

Because I knew in advance about the game I made sure I packed appropriate clothing. 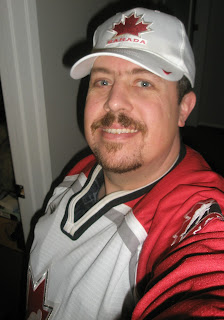 Calgary Flames jerseys would of course be the best option but Team Canada gear will work for attending an NHL game featuring any Canadian team.

Seats were great, mid-level in the corner. I won’t drag this out too much going into long descriptions, first there was the anthems: 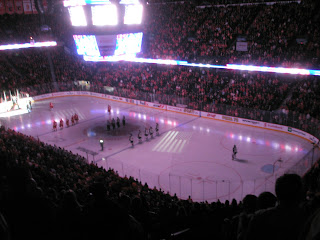 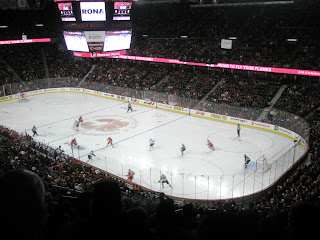 It was a clean game with few penalties and no fights (though there was almost one). Calgary had an early goal but then the rest of the 1st period were playing poorly. Picked it up in the 2nd and improved further in the 3rd. Three periods and two beers later Calgary won 3-1 so the crowd was in great spirits heading home: 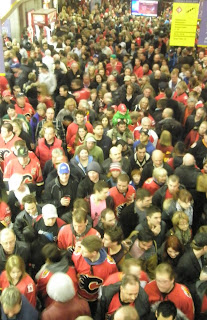 A good time was had by all. Even if you’re not familiar with hockey try to see an NHL game if you are ever in North America.

I've started my annual Canada vacation. My niece and nephew were thrilled to see me. My brother managed to take a photo of the damage: 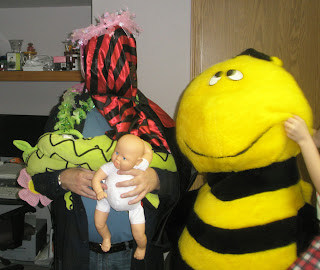 Yep, that's me under there. Don't ask what happened.
Posted by Glen McKay at 9:39 AM 1 comment:


All these years doing this blog I forgot to mention Arab names!

Sometimes the name will have “bin” (for ladies there will also be “bint”) in-between the names. This simply means “son of”, or in the case of “bint”, “daughter of”. So in the example above the gentleman might go by the more formal Ali bin Mohammed bin Ahmed Al-Essa.

This can become important since Gulf Arabs tend to use a limited selection of names. Lots of Arabs are named Mohammed, Ali, Ahmed or Abdulla, and tribal names are not as diverse as Western last names so I'm willing to bet there are plenty of Qatari men named “Mohammed Al-Marri” or “Abdulla Al-Thani”, which would get very confusing without using the middle names.

If you are from the royal tribe (the Al-Thani tribe), then the middle names become very important in order to determine how you are related to important members of the Al- Thanis, such as His Highness the Emir, or his Excellency the Prime Minister. Al-Thanis tend to use more middle names than other Qataris.

So let's look at some examples:

This link will take you to the webpage listing the Board of Directors of Qatar's largest bank, QNB.

Here are the names of the first seven Board Members listed on the website:

So as you can see from this listing the Al-Thani Sheikhs all use the more formal “bin” whereas the other members of the Board do not. The Sheikhs also list two middle names, whereas only some of the other board members do. The middle names are also important because two of the Sheikhs are named, if you use the Western convention, “Sheikh Hamad Al-Thani”.

Let's look at some of the Qataris on the Board of another bank, Commercial Bank of Qatar:

Again all of the Sheikhs are using the more formal “bin”, and H.E. Mr. Al Attiyah is as well, but Mr. Al Mannai is not. We can also tell that two of the Sheikhs are probably brothers since they are both “Bin Ali Bin Jabor” but they are not closely related to the third Sheikh, at least on their father’s and grandfather’s side.

Speaking of which, what about ladies? Naming still follows the paternal line. According to Wikipedia, His Highness the Father Emir, Sheikh Hamad bin Khalifa Al Thani, has many daughters, for example:

So after their first name the naming convention continues down the paternal line.

Unlike the West though ladies do not change their last names when they get married. Again according to Wikipedia, His Highness Sheikh Hamad has three wives:

So two of his wives are from the Al Thani tribe whereas one is from a completely different tribe, the Al Misnads. As children are named after their father all the children will be “bin/bint Hamad bin Khalifa” regardless of whether their mother is an Al Thani or Sheikha Al Misnad.

A great example was brought to my attention with the new Emir and the new Prime Minister.

So I made a comment to a post that at first glance they might be cousins (because both have a grandfather named Khalifa) but I took a look through the web and found that the former Emir, Sheikih Khalifa Al Thani, never had a son named Nasser, so the "Khalifa" in the Emir's name is different from the "Khalifa" in the PM's name.

However a Qatari commented on my blog that the Emir and the PM are related, you just have to go back further with more "bin":

It may get confusing at first, but it becomes pretty straightforward once you get used to it. I like the fact that an Arab’s name can tell you a lot more detail about his history than a Western name.