Update on Life in Qatar


What has it been now, 2 months since the blockade started? It doesn't look like it’s going to be lifted anytime soon. At this point though it doesn't seem to matter too much that it will be continuing as everyone has been getting used to it.

I know many Qataris and while they continue to monitor the news about the situation everyone has sort of moved on with their lives and accepted that things have changed. The country now has new supply routes for food, and shipping of other goods has now be re-routed through places like Oman and India. It's unlikely that they will go back to using UAE or Saudi even if the blockade is lifted, those trade links are gone. Some products in shops are different, now instead of Saudi brands you see Turkish, European or Indian, otherwise there hasn't been much of a difference. If a visitor came to Qatar they might not even realize there was a blockade.

What they would see is tons of portraits of His Highness on billboards, buildings, cars, the walls of homes, everywhere. If the Saudi/UAE were hoping that the blockade would help turn people against His Highness they heavily mis-gambled as the crisis only served to strengthen support from the people. I have not heard of any Qatari who thought Qatar's approach to the crisis was wrong, or that Saudi/UAE were right in what they did. No one. Not even an inkling that maybe things should change. Support for the Royal Family has only grown stronger. I've never recalled such unity in the past, even major events such as receiving the 2022 World Cup did not have universal support amongst the Qatari people.

From what I can tell Qataris are saddened that this crisis has unfolded the way it has and that it is now severing the unity of the GCC. Financially Qatar can manage the impact just fine and are even developing a new gas field which will supply even more revenue, making the short-term financial impact from the blockade moot. Most Qataris have moved on, accepted that vacationing or doing business in places like Dubai is over, that goods from Saudi and the UAE aren't returning (and they probably wouldn't buy them if they did) and that there is a new reality going forward. At this stage having the blockade last a year wouldn't make much of a difference to many people anymore. They wish it would end of course but accept it might be in place for a long time.

There are some industries that are taking a hit though. Tourism is one (a significant number of visitors were from Saudi) so the hotels have surely seen an impact, as would some restaurants and tourist venues. Small traders who relied on shipments trucked in from Saudi also have problems, it's not so easy for small companies to simply shift trade routes like the large companies can. I also assume the used car market is taking a beating as well, lots of used cars were sold to Saudis then driven across the border. That market is gone.

As for my life it hasn't really changed. The malls are still open, my favourite restaurants still operate, everyone still meets at majlises or cafes as before, there was no mass exodus out of the country, and leisure activities and vacations are happening as usual. I had never been to Saudi Arabia before anyway so it's not like closing the border made a big difference to my travels. Life is, perhaps surprisingly, pretty much the same as it was before the crisis.

I still hope things settle down and the blockade ends though.

Posted by Glen McKay at 8:06 AM No comments:

A few days ago a friend of mine was surfing the net looking for some local artwork to hang up in his house. He found some nice charcoal sketches by a Yemeni artist who lives in Qatar. My friend called him and found out that he sells his work from a stall at the Souq Waqif Art Centre so we headed out there. My friend bought the two pieces that he liked but came up with an idea -- let's have him do sketches of us as well. I figured what the heck and went along with it.

Now these aren't those 20-minute portraits that you get from guys sitting around tourist areas in Europe, his work typically take a day or two. So the artist took a series of pictures of us and would use them for the drawing.

I went and picked them up today. Here's mine: 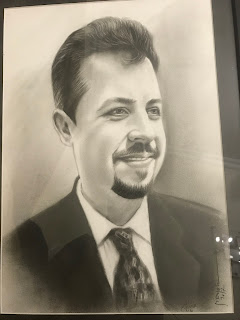 So what do you think? Is my forehead really that big?! (I suppose it is. *sigh*)

I'm not sure what it is about the portrait, perhaps it's due to the black/white composition, maybe it's a bit of artistic license, but I think it's a cross between me and someone trying to capture the classic look of an Egyptian movie star. Like I'd be one of the supporting characters shown on the edge of a movie poster or something. Maybe it's the suit. 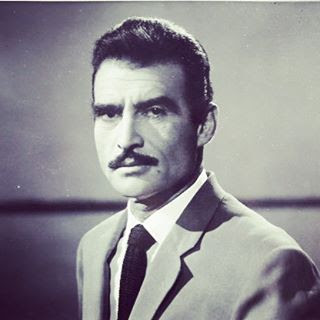 Anyway it has good detail and came with the frame and glass. I think he did a great job with my friend's portrait (Not going to show you though, sorry).

If you're interested in getting a portrait done just go to the Souq Waqif Art Centre and check out the various tables. A few of the artists there do portraits so hopefully someone has a style that you like.