So did anyone see that semifinals thrashing of Uzbekistan by Australia 6-0. I was there, thanks to a ticket provided by an Australian friend. What a blow-out that was, the score should have been even higher. Needless to say the Australians were happy.

Before I continue I discussed this issue back in 6 October 2007 on this blog, here is what I had to say back then:

The newspapers recently reported that last year Qatar had 207 road fatalities, which works out to approximately 6.9 deaths per 10,000 vehicles on the road. For comparison this webpage has the deaths per 10,000 cars rate for most countries in the world for 1996, in the US the rate was 2.0, Canada's was 1.8. Thus 6.9 is pretty bad. The Government has just passed tougher laws and installed more speed cameras in an attempt to crack down but people are skeptical as to whether it will be enforced. Time will tell. I think the problem is not the laws, it is just that enforcing those laws, and punishing reckless drivers, is weak at best.

I could not find statistics from the traffic department for the number of vehicles on the road in 2006. If we take the percentage growth mentioned in the news article over 2010 and apply that rate back to 2006 (which I think might be a bit generous because growth stalled up a bit during the financial crisis in 2008-9) leaves the average number of vehicles during 2006 at about 497,000. That would equate to a death rate per 10,000 vehicles of 5.43, much lower than my 6.9 calculation earlier but still way higher than Western countries.

So in three years the death rate per 10,000 vehicles has gone from 5.43 to 3.13! That is excellent news and it would appear that the measures the Government was putting in place to try to reduce traffic deaths are working. Still have a ways to go though, after this article was printed an Irish colleague looked up similar statistics for Ireland and we determined its rate was 1.32. If the Qatari government could get the death rate that low it would have saved 130 lives in 2010.
Posted by Glen McKay at 2:09 AM 3 comments:

The last few weeks has seen the Asian Cup 2011 here in Doha which allowed me the opportunity to take in a few games to see some first-rate teams. I'm actually going to one this afternoon. Once I took a look at the schedule there was one game I definitely wanted to see -- Iran versus North Korea. An ‘Axis of Evil’ matchup! I told a couple Americans they should show up and bring an American flag, or maybe pictures of George Bush, that would be amusing. No, there was no way I was going to do it myself, I'm a friendly Canadian. I also wanted to see if, like the recent World Cup in South Africa, North Korea was going to fly in a couple hundred of obedient citizens to be flag-waving fans. A Qatari friend of mine went with me as he wanted to see them too. Sure enough when I got to the stadium outside were a couple of hundred North Korean men (no women) all in line who were then marched in to the stadium in groups. They had North Korean flags and some of them had pins with a picture of ‘Dear Leader’. 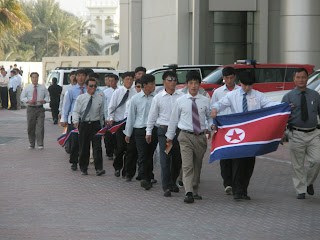 They also had a leader who would direct them on cheers. A British guy was trying to get them to trade a flag or a pin but I don't think they understood English and even if they did I doubt they would've done it. It turned out that my seats were only about five rows away so I was pretty close to them and could record a video (the cheerleader is in the middle of the video): North Korea lost 1-0 and eventually did not make it to the elimination round of the tournament. So I guess they flew all of the citizens back home. I wonder what they thought of Doha, given that it is clean, modern, and has electricity that works 24 hours a day (unlike North Korea)? I wonder where they stayed? I doubt it was in one of the nice five-star hotels. Did the visit maybe shake any misconceptions they might have about life outside of North Korea? Somehow I doubt it. It is highly unlikely they would have been allowed to come along if they were not Triple-A Grade devotees to Dear Leader and most of them looked to be in their 40s or 50s so they may have been former military personnel. Off to Australia versus Iraq now, thus I will have seen all three ‘Axis of Evil’ teams.

Posted by Glen McKay at 2:33 AM No comments:

The last couple of days I've had a bad cold which means just lounging around the house going through tissues. The sore throat affected my voice so much I couldn't even use my speech recognition software that well. Seems to be abating now though which is a good thing -- I hate being sick.

We'll keep this entry short. There was a recent article in the newspaper surveying Qataris regarding domestic chores. Most of it is pretty much what you'd expect from a conservative society, lots of “women should do the household chores and men shouldn't”. However, I found one interesting difference from what we would consider a "traditional" Western view:
Some 43.5 percent of the respondents said couples should do shopping for the household, while 27.8 percent said the onus should be on the head of the family. Another 22.4 percent said wives must do the shopping alone.
More stated that the husband should be the one doing the household shopping, not the wife. I don't think this was ever the prevailing view in the West, that would land squarely as part of the wife's work.

So why is that? It may have to do with the view that the person making the money should be the one who has the decision on spending it. Could also be in part due to views that women should not go around unescorted (now that I think about it how would the wife do her shopping alone if she expected to have a male relative along?)

I will try to keep my eyes peeled for that to see just how prevalent it is.
Posted by Glen McKay at 8:02 AM 3 comments: