[latest update on Gulf Mall is August 14th, you can find it here]


Was over at Gulf Mall today, I'm surprised at how many stores are open. Unlike when Ezdan Mall opened and stores opened bit-by-bit over 6-8 months it looks like Gulf Mall made sure most stores were ready to open or close to opening around the same time. Around three-quarters of the non-restaurant shops are open. This meant the mall was pretty busy as lots of people were there shopping at the new stores.

The major thing not open are the restaurants. Most of the cafes are open, and I suppose Bagel Bar and Brioche Doree (a cafe/bakery/restaurant similar to Paul) are open and you can get food there, but none of the restaurants are open. 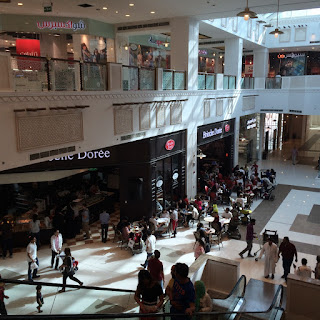 Thus no Shake Shack or Nandos or other restaurants. A Turkish restaurant is almost ready, staff were in there I think being trained. 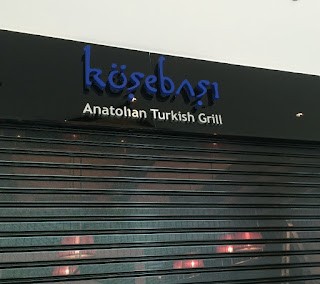 And they started putting tables out in the food court so maybe that'll open soon. 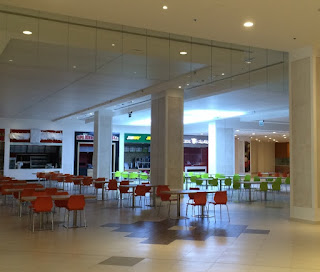 And still no IHOP. A bit of work still to go. Maybe it will open in the next month? That would be a bit of a problem given Ramadan is approaching, would anyone want to eat pancakes in the evening? (I would!) 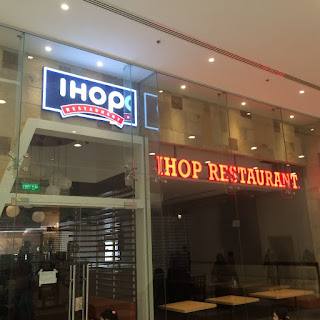 Waterfront Cities of the World – Doha


I forgot to mention this on the blog, a few years ago I was contacted by a Canadian TV production company who were doing a documentary series called Waterfront Cities of the World. They were doing a Doha show and wondered if I could be on it, showing them a part of the city. So I agreed, they arrived, we did a shoot at City Centre Mall and the area of shops behind the Mercure Hotel. After that I went off on vacation, and in the end I never heard back from them about whether the show was broadcast. I didn’t give it a lot of thought, TV shows shoot a lot of footage so I figured maybe my bit hit the cutting room floor. That’s why I didn’t bother telling people about it, no point in saying you’ll be on a show when you might not be.

Almost a year later I heard from a Canadian friend of mine, he saw the show and I was on it! That was cool, I guess I made it into the final show after all.

Then later I heard from an American friend, he saw it on Discovery Channel and was pretty surprised to see me on it. Wow, I didn’t realize it would be broadcast outside of Canada.

Then a year later some Austrians that I know saw it on Austrian TV. Huh?! Needless to say they were surprised to see me on it.

The show was available online briefly at the website of the TV production company but was eventually removed. At least my family and I got to see it.

But thankfully, someone has finally posted the episode on YouTube. (well, maybe thankfully, I always get self-conscious about these things, is that how fat I actually am? What’s with that haircut? Is that what my voice actually sounds like? Gah!) It was also great to see Shabina Khatri from DohaNews on the show as well, she and her husband did a lot of work helping the TV crew and touring them around. (You've heard of DohaNews, right? If you haven't check it out.)

So here it is, Waterfront Cities of the World – Doha

Night photos of the Museum of Islamic Art

Nothing big to report, was out for a walk on the Corniche and took these photos of the Museum of Islamic Art. In the second one you can see the Moon and Venus overhead, which I thought was a nice shot. 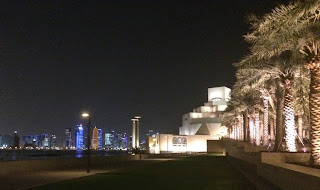 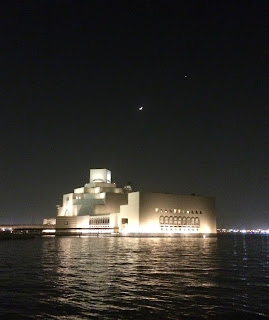 
Many Qataris don’t travel all the way to Canada, and while some do go to the US they rarely go to places like Vermont. Thus, many Qataris have never tried maple syrup. Maple syrup is sold here, you can occasionally find it in grocery stores, but like many specialty foods in Qatar you’ll see it one week when some stock comes in then you won’t see it again for months. I think most people just see a syrup bottle, assume it’s regular pancake syrup, and walk on by.

When I travel to Canada I always try to bring back maple syrup or treats like maple sugar or maple butter for people to try. One of the Qataris I gave a bottle of syrup liked it a lot so took it home for his family to try.

Fast forward a couple of months later and he gave me a bottle of maple syrup, only it looked a little different, a bit darker and had some bits of plant or something in it. 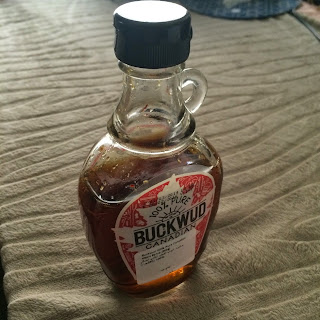 Well it turns out that a lady in the house, I think his Mother, decided to prepare the syrup the same way one can prepare an Arabic sugar syrup, by heating it and mixing it with cardamom and saffron. He said the spices really balanced the sweetness of the maple syrup and it tasted great so he gave me a bottle to try it out. 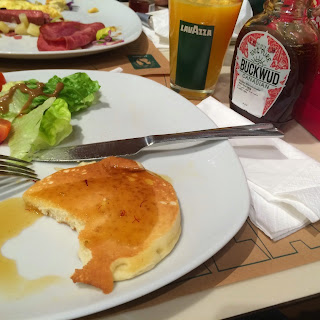 I tried it twice, once with a friend at a restaurant, and once with a family I know (who made pancakes for the occasion). Both times I also had regular maple syrup on hand for comparison. Verdict – Qatari Maple is really nice. The spices were not subtle and distinctively changed the flavour but it made it seem less sweet and with a more complex taste. I wouldn’t have a problem using either regular or Qatari syrup, two friends were of the same opinion, one preferred regular maple, and his daughter thought both the regular and Qatari syrup were great.


I don’t have the exact recipe but you heat maple syrup in a pan and add some crushed cardamom and a little bit of saffron (apparently saffron is strong enough that you don’t need to use much). After mixing let it cool then put back in the bottle, or use right away, preferably with pancakes or waffles!


This week I received an invite to a wedding. As typical for weddings in this part of the world I was told about it with little notice, in this case 2 days in advance. I’ve been here long enough that I wasn’t surprised in the least.

My invite was a text from a mutual friend that there was a wedding on Friday and we were invited. Again a ‘casual’ invitation like this is fairly standard, men’s wedding are open to almost all men to attend so formal invitations are typically given to relatives, friends, and maybe some co-workers. As it was a friend’s brother that was getting married, and I had never met the groom before, there’s no reason why I would receive a formal wedding invitation.

So on Friday evening we were off to the wedding tent. 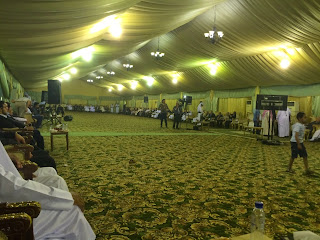 This wedding had some differences from a typical Qatari wedding as the groom was only half-Qatari, his father was from North Africa, so the wedding was a blend of some Gulf Arab customs and customs from other areas. For example the groom wore a suit, not a white thobe and bisht. I’d never seen his brother wear a thobe either so I was expecting that. For entertainment a Qatari wedding would typically have drums and a group of Arabic singers, with guests occasionally sword dancing. At this wedding the music was from a DJ and the guests themselves were dancing in a circle, something I’ve never seen at a Gulf wedding before. 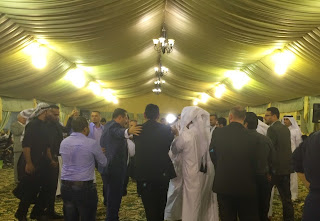 Dinner was the traditional lamb on rice. Typically we would all sit on the floor to eat (unless the wedding was at a hotel) but at this wedding there were tables for all of the guests to sit at rather than sitting on the floor, again something I’d never seen at a wedding in a tent. The tables were bigger than the platter so guests mostly stood anyway to eat. As per custom there was no cutlery, you were expected to eat with your hand (as in your right hand, never touch communal food with your left hand). 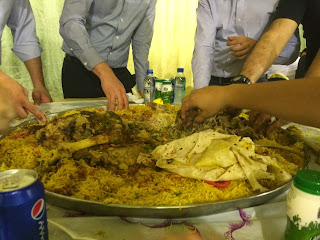 After dinner we hung around for a while longer chatting with friends before heading out. I’m guessing that the groom would be leaving around 11pm to go to where the ladies wedding party was to pick up his wife. Having separate men’s and ladies parties is standard in the Gulf but I spoke to an Algerian friend who told me in North African countries separate parties is also common if you’re having a large number of people over to celebrate.

Best wishes to the groom and his new bride!


Last December my office had an National Day celebration and I was lucky enough to win the big raffle prize – a trip for two to Turkey! So I’ve been away on vacation in Turkey with a Turkish friend of mine. It was great to win airfare to Turkey as I had to go there anyway to sort out some things so it was a bonus that I got free tickets. (By the way Turkish Airlines your food is pretty good but you really need to work on the entertainment system, Qatar Airways blows you away in that department). 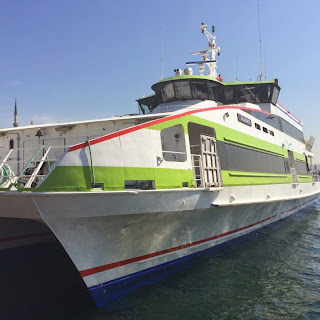 To Mudanya, where my friend has an apartment. 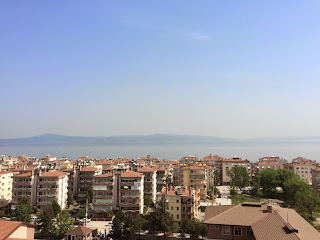 Spent a few days in Mudanya and Bursa, doing business, eating at nice cafes and restaurants, and of course enjoying Baklava with Turkish ice cream. 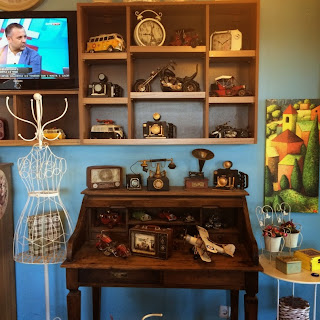 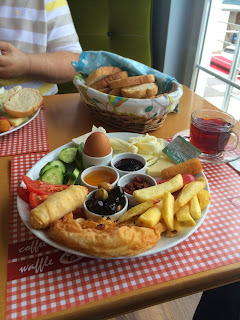 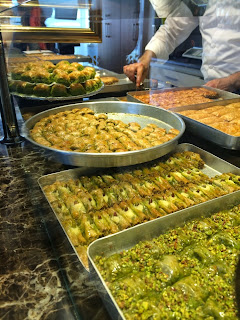 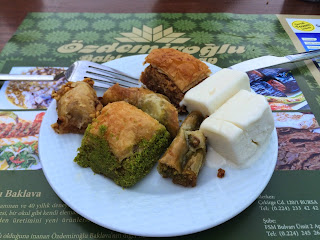 Also went for walks along the Corniche, the weather was pleasant but not too hot, things will really start getting busy in the next few weeks when summer arrives and hordes of people from Istanbul and Bursa come to Mudanya for seaside trips. 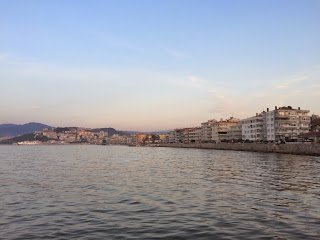 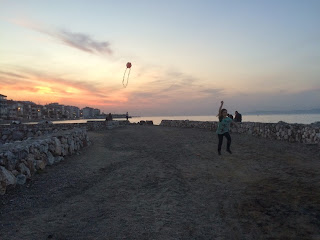 Then it was back to Istanbul for a few days. 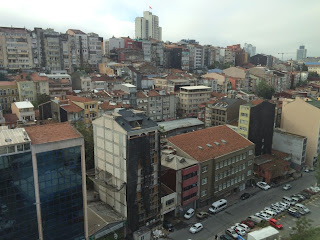 We mostly met up with friends, and while having lunch with people we met on a bus tour of Turkey last year they surprised me with a cake, which was really nice of them. I was definitely surprised. 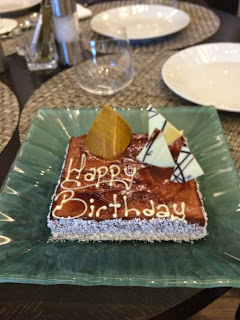 So now it’s back in Doha, gearing up for the hot, hot summer. I'll miss Mudanya though, but I'll be there in October for another trip. 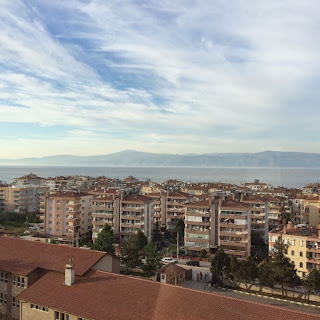