Haven't posted this week because I've been home ill. I thought it was a cold until my nose started turning red, swelling, and I came down with a slight fever and feeling of nausea. Off to the clinic, was diagnosed with a nasal carbuncle or celluitis, and immediately put on I.V. antibiotics (!!) before being sent home with two other antibiotics and some painkillers. The doctor stressed not squeezing or putting pressure on my nose as it could drive more infection into the bloodstream. 24 hours later the swelling is still there but I was able to sleep well, no fever or nausea issues. I looked online and it said it'll typically take 2-3 days for the swelling to start to subside. So I'm chilling out at home and hopefully by the end of the weekend things will look better.

Email ThisBlogThis!Share to TwitterShare to FacebookShare to Pinterest
Labels: Health

I've noticed in the past month or so heightened security in the country. When I've gone to hotels they now have metal detectors at the front door, something that was standard up until around 2010 or so but hasn’t really been in use the last few years. A new twist is mall parking lots, at two malls I've been to with basement parking there were security guards at the entrances to the basements, using mirrors to search under cars and in some cases asking people to open the trunks of their cars so it could be searched. I've never experienced that before in Qatar.

Why this is happening? I did a search and discovered an article from Dohanews that during Eid there was a directive from the Government for places like malls and hotels to increase security. I was on vacation during Eid so I missed the article. It appears that a month later the security measures are still in place.

That increased security has been put in place in Qatar is not too surprising given recent problems in the Middle East with extremists and terrorists. There have been attacks in Saudi Arabia and Kuwait in recent months so it's reasonable to assume that Qatar is at increased risk. Thankfully nothing has happened here yet though. In fact I don’t recall any kind of terrorist attack in Qatar in the last 10 years. The last one that I know of took place in 2005 when a bomb blew up outside of a theatre where a play was being held, killing one person. The guy responsible did not appear to have been connected to a known terrorist group.

GCC nationals (citizens of Bahrain, Kuwait, Oman, Qatar, Saudi Arabia, and the United Arab Emirates) can freely travel to other GCC countries, making it more challenging for Governments to scrutinize potential terrorists. The recent mosque bombing in Kuwait was done by a Saudi who had flown into Kuwait that day, he could just as easily have driven across the border.

Based on recent attacks it is mosques that are at greatest risk, especially Shia mosques. I don’t hang out in mosques so I don’t think I’ll be in much danger. There is a small Shia population in Qatar so there are a few Shia mosques, hopefully they’ve improved security there as well.

I still intend to live my life as usual and not get caught up in a cycle of fear.

Posted by Glen McKay at 8:12 AM No comments:

It hasn't been long since my last update about Gulf Mall but I was there today and there was an exciting development. No, not IHOP (September 4 update: still closed), I was walking by a walled area where a shop was under construction but I noticed something in a hole near the ceiling. 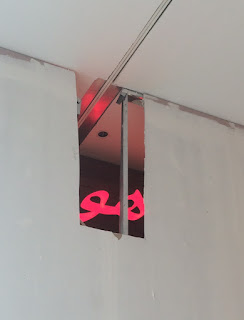 That looked familiar, guess what it is . . . 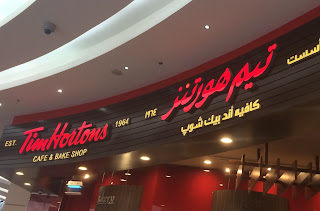 There'll be a Tim Hortons in Gulf Mall! I then went to the side where some work orders were posted for further proof. 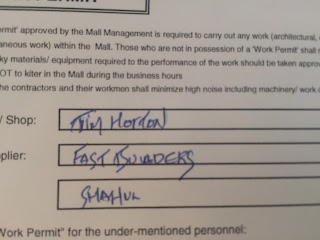 When I went to the Tims in Ezdan Mall I mentioned the new location and the guy at the counter said, "hopefully it'll be open in a week." Ummmmm no, sorry, that's not happening my man. It has a long way to go, won't be open anytime soon. (I took a picture through a hole in the door.) [September 4th update -- wow, was I wrong, Tims is open now] 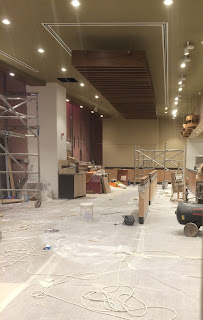 In other news I noticed a new cafe in the mall that just opened up. 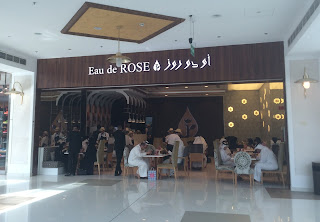 So new cafe at the mall, Tim Hortons opening September 4th, and IHOP I'm guessing sometime within the next few weeks.


When I arrived in Qatar I was always hearing about a place called “Crazy Roundabout”, an intersection with some bizarre roundabout that confused people. That wasn’t its official name but people began referring to it as the “place with that crazy roundabout” and eventually the name stuck. Apparently there were accidents almost everyday at this roundabout because of how difficult it was to navigate.

Unfortunately by the time I arrived in Qatar it had been removed and replaced with a signal (not surprisingly everyone calls it “Crazy Signal” in memory of the roundabout) so I never got to see this famous Crazy Roundabout. I recall years ago I tried searching for a picture online but without success.

Fast forward to this week when I was chatting with Qatari friends and for some reason the topic moved on to roads in Qatar so I brought up Crazy Roundabout and how I’d never seen it. They did a web search in Arabic and voila – they were able to find an old picture.

So here we are everyone, the infamous Crazy Roundabout. Enjoy. 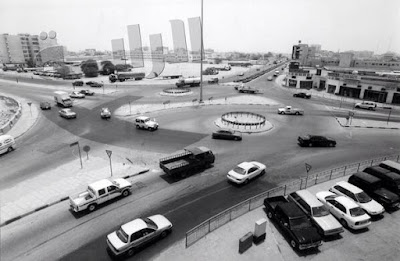 [latest update on Gulf Mall is August 14th, you can find it here]

Just a quick post about Gulf Mall. Blogger.com provides statistics showing what people were searching for that led them to the blog and I've been getting a few searches a week about whether IHOP is open in Gulf Mall. I was at the mall tonight and nope, still not open. Shouldn't be much longer though. [September 4th update -- still not open]

It looked like all the restaurants in the food court were open though, as was an Italian place on the second floor called something like 'Menezane'. No IHOP, no Shake Shack, no Pei Wei.

Spent a night at another Belgian city famous for old buildings and canals - Ghent (Belgians spell it Gent). 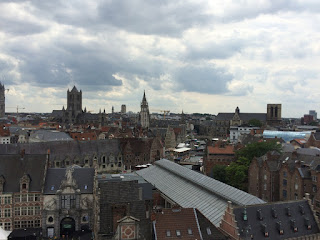 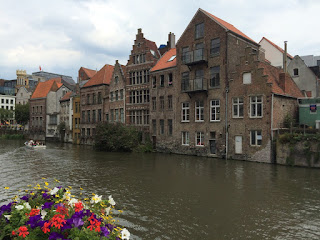 Wandered around for a while and found the medieval castle at the heart of the city. Naturally it contained things like reenactments of old-time torture. 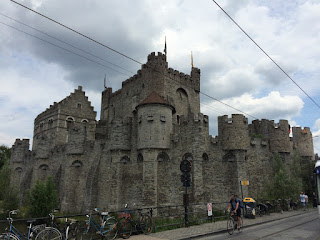 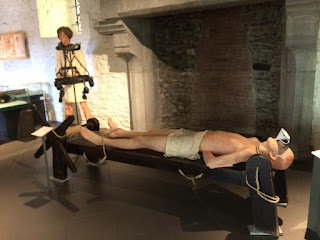 Just outside the castle was a big beer garden with a band covering all sorts of hits. I was surprised how the crowd would sing along to the lyrics of English songs whenever the band played them. 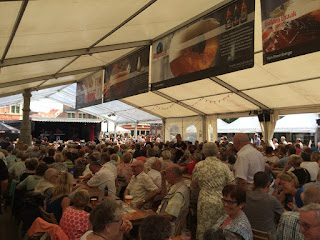 Why the beer garden? It turns out there was a big festival that week, which appeared to involve lots of concerts, lots of street food and lots of drinking. Here's only one of the about 5 that I saw in the city center. 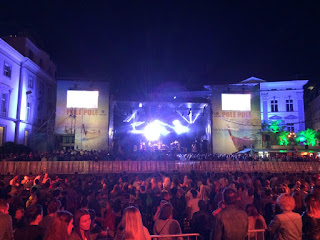 And here's the front of my hotel at 11:30pm, good thing my room didn't face the street. 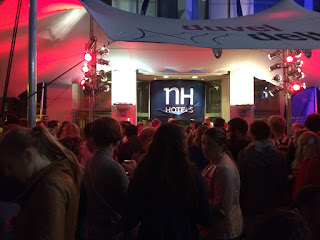 Unfortunately as I was only there one night I didn't have much of a chance to see the touristy-things in Ghent, and the festival took up a lot of my wandering time. Seemed like a nice city.


Brugge is one of the more well-known cities in Belgium, famous for its medieval buildings and canals. It deserves the hype, it turned out to be my favourite city that I visited during the trip.

Check out the photos. 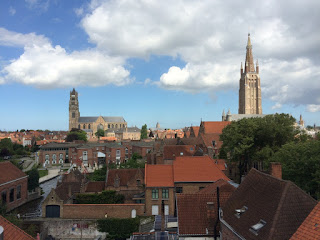 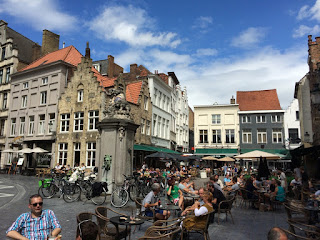 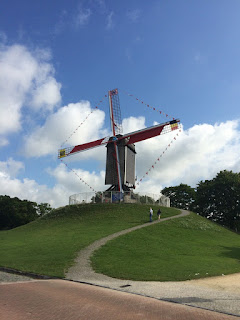 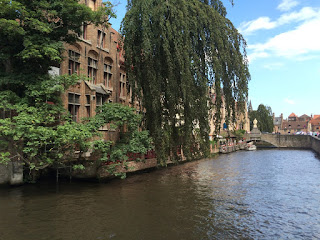 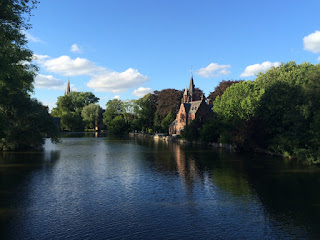 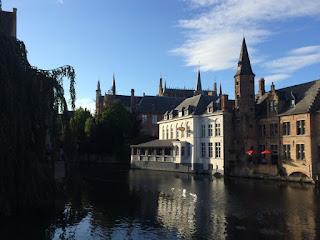 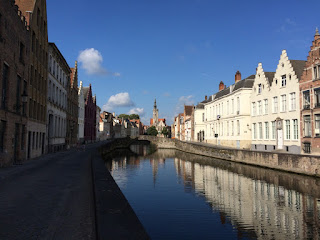 But it wasn’t just nice buildings there were interesting art exhibits and concerts while I was there. One of the exhibits was in a church where they converted much of the inside to an unusual playground (even with a swing). 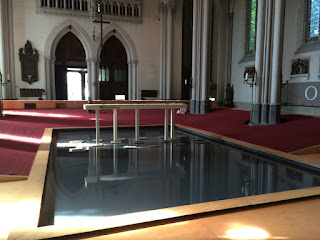 And there was a big party in the main square. 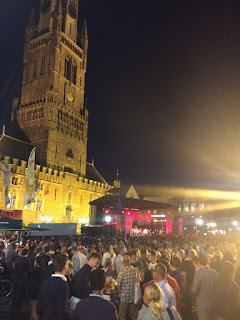 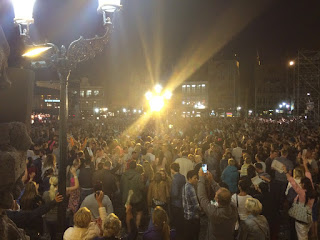 So many old buildings, I’m not sure how the city managed to escape relatively unscathed from World War II. So many buildings were from the 17th and 18th century. I even visited Brugge’s oldest pub, from 1515 (celebrating its 500th anniversary!). 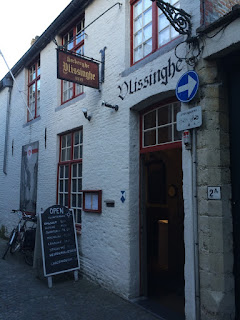 Definitely worth visiting. I wished I could have stayed at least one more day, I was there 2 days and there was still a lot I hadn’t seen.