Last night there was a lunar eclipse visible from Australia and most of Asia, including Qatar. In Qatar the timing of it was great, it started around 9:30 PM, so you didn't have to get up in the middle of the night to see it. I happened to be at a friend's majlis with a bunch of other guys at the time. We followed it on TV but also went outside to take a look. Doha has a lot of light pollution and dust which obscures the sky (you rarely see stars) but the Moon was easily visible. 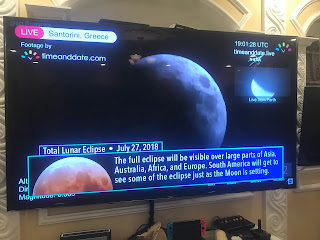 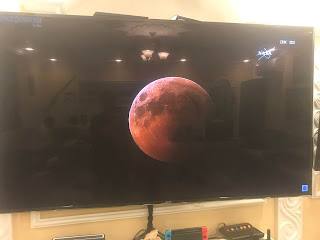 Here's a picture of it from the majlis. 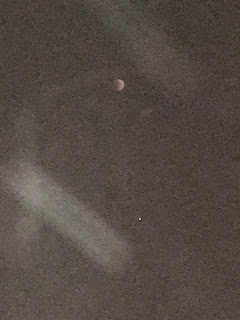 By the way that bright dot that you see below the Moon is actually Mars. Many people don't realize that, depending on the location of the planet, the nearby planets can look brighter than stars. In fact after the Sun and the Moon the next brightest object in the night sky is Venus. So when I saw a star-like light near the Moon I knew it would be a planet, either Mars or Jupiter. The light pollution and dust covered the actual stars. Thanks to the Star Walk app that I have on my phone I was able to identify it as Mars. (If you like looking at the night sky I recommend downloading Star Walk 2. Great app.)


But my friends had to do one other thing, pray. In Islam you have to do a special prayer whenever there is an eclipse. It's in the Sunnah, both the Bukhari hadiths and the Al-Muslim hadiths, that the Prophet Mohammed performed a prayer during an eclipse and instructed his followers to do likewise whenever there is an eclipse. The prayer is different for lunar and solar eclipses, and my friends looked up online what they had to do for the prayer. Different schools of Islam may have minor differences in how to do the prayer but all agree that one should be done. Here's a link that discusses it.

The prayer only took a couple of minutes and then everyone was back watching the eclipse and chatting. At its darkest the Moon was difficult to spot, I wound up looking for Mars as it was easier to see at which point you found the Moon. 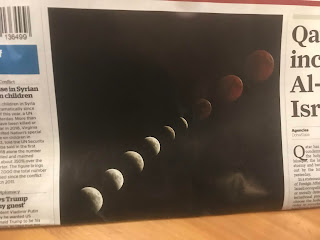 I was glad I had the chance to see the eclipse.

Email ThisBlogThis!Share to TwitterShare to FacebookShare to Pinterest
Labels: Islam


It has definitely been a little while since I last posted on my blog.

It was not due to any kind of emergency, no, I wasn't in the hospital. For Eid I went on a vacation to Thailand with about 15 friends, staying in Phuket for a week before doing a road trip up the country to Chiang Mai in the north. After I returned to Qatar I was spending time just getting caught up with work, chores and so forth. Then I fell sick with a bad cold (I usually get sick after a long vacation, exposure to new germs and all that).

I'm better now, guess I should get back to blogging.
Posted by Glen McKay at 10:02 AM No comments: