Just a quick update for all my Canadian readers, I was at the Tims at Ezdan and saw this sign: 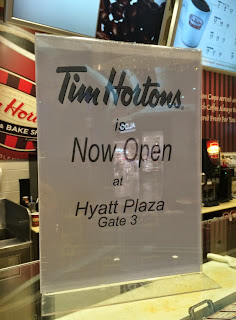 Works for me! I'm in that area a lot. Here I figured the next Tims would be in the new Villagio Food Court that they're building.

[April 30th update: a friend of mine invited me to go so we went, here's a pic of the new Tim Hortons] 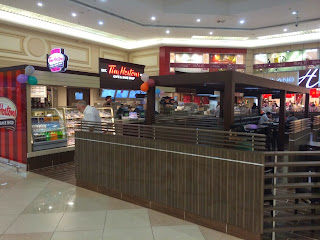 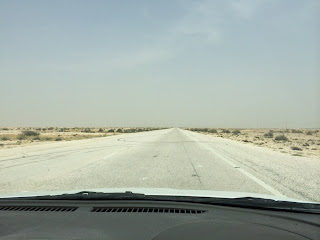 Took the opportunity to go up to Fort Zubara with a friend of mine, he had never seen it before. It'd been I think four years since I had last been up to the Fort.


Thanks to the recent rains the northern part of Qatar had areas where it was almost prairie-like with lots of grasses. The first picture is from September 2006, the next one during my recent trip. 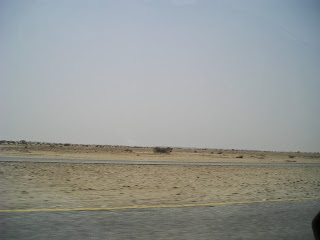 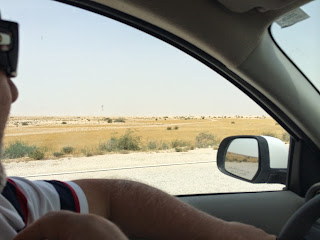 So how much has the Fort changed? 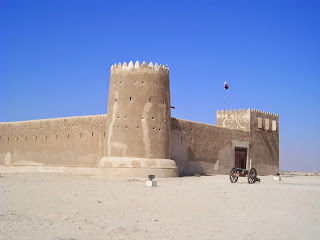 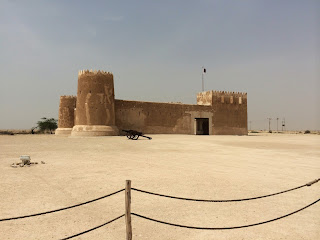 Not too much of a difference on the outside, though there is a nice parking lot and small rope fence. There was a new monument just the left of the Fort. 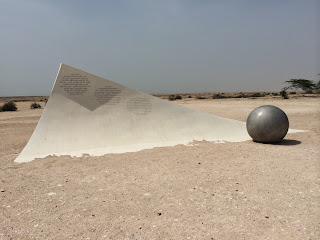 It notes that the Fort and the surrounding archaeological dig are now a UNESCO site (I didn’t know it had been awarded that, I wonder when that happened?)


So we went inside. 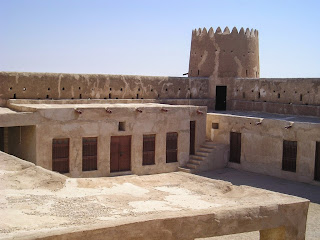 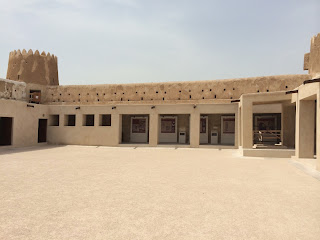 Looks like they've done some renovation as some of the inside buildings look new, and they put some displays out. There was even a gift shop, which definitely wasn't there before. It made for a handy place to get drinks if it was too hot, before you would have to go about 10-15km to the town of Al-Shammal to get supplies. 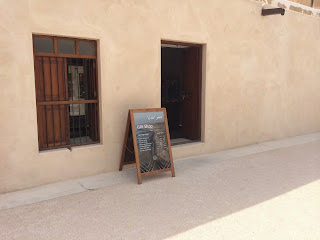 There is a lot of change when you went inside the rooms. 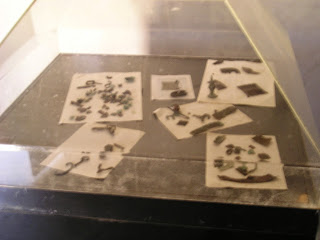 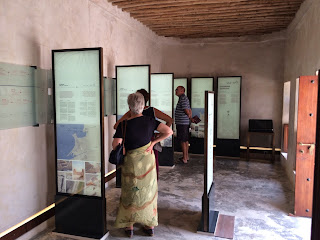 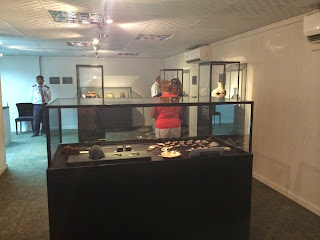 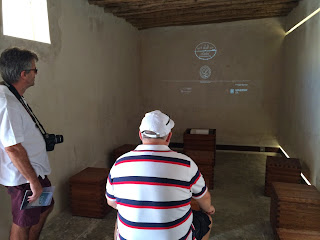 What a difference! Informative displays, even a small room with short films describing the Fort restoration and the Zubara archaeological dig. I remember before many of the rooms didn't even have anything in them.


The displays have improved a lot. No, really:


Before (help yourself to a vase) 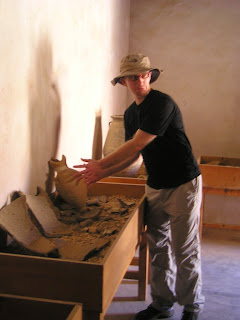 After (under glass with accompanying descriptions) 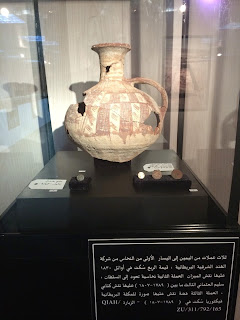 So the Fort really has improved over the last few years. A lot of the displays even discuss the archaeological dig, which was never (and still isn't) accessible by tourists. The city of Zubara is a lot bigger than I imagined, probably holding a few thousand people at its peak. The Fort had a pictures and displays of the site and the history of the city.


So if you saw the Fort years ago so figured you didn't need to bother seeing it again give it a try on some lazy weekend day.


I was at Souq Waqif again watching the entertainment during the Souq Waqif Festival and there was something interesting about an Arabic band that was on stage. 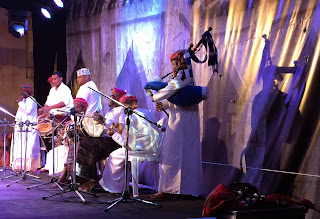 Yep, they had a bagpiper!

Most Westerners equate bagpipes with Scotland and most people (including myself up until recently) don't realize that the instrument is actually much more widespread. While its origins are subject to debate there is evidence that bagpipe-like instruments originated in Roman times, which means they would have been used throughout the Roman Empire, including the Levant and the Holy Land. I found one tourist website about Syria that claimed bagpipes originated there during Roman times. From Roman times bagpipes spread throughout the area and instruments similar to a Scottish bagpipe can be found today in places like Turkey, Bulgaria, Syria, and Arabia. It’s a bit ironic that the instrument is best known with Scotland given that the Romans never conquered that area.

I’ve seen Arabs using bagpipes before but for traditional music it is not as common as it would be in Scotland. Drums and percussion instruments are the most common instruments, with bagpipes being something you only see occasionally.

But take a look at the picture again, do you see the second set of bagpipes resting on the ground? The fabric pattern certainly looks similar to a Scottish tartan. This band is from Oman so I did a search on traditional musical instruments in Oman. Websites such as this one had some interesting information. Despite the fact that bagpipes are used in many parts of Arabia they were not traditionally used in Oman (who call bagpipes ‘habban’) until recently. So where did they get them from?

The British, during the colonial period! So Arabia has bagpipes -- but Omanis didn't use bagpipes -- until they were introduced to Oman by the British. So these particular bagpipes are based on the Scottish bagpipes as opposed to traditional Arabian bagpipes. Yep, fooled you with the title, these aren't Arabic bagpipes. :p

The world is a funny place sometimes.

Posted by Glen McKay at 1:13 PM No comments:

Down to the Beach


Weather in Qatar is now sunny and 30+ degrees, perfect for going to the beach. A buddy of mine and I headed down to Sealine Beach for the day.


Normally Sealine wouldn't be my first choice but ever since the construction at Salwa Road has been completed getting to Sealine is really quick -- maybe 45 minutes from Ramada signal. My buddy and I never go into Sealine Resort itself, we always park a few hundred meters down the road where the dunes just start to meet the water. It's a pleasant enough beach and unlike many other places in Qatar the water gets deep relatively quickly so you can go swimming. 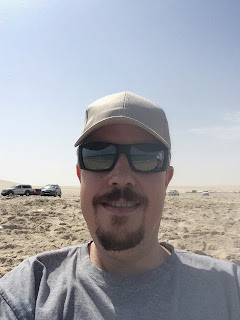 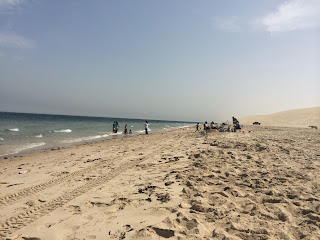 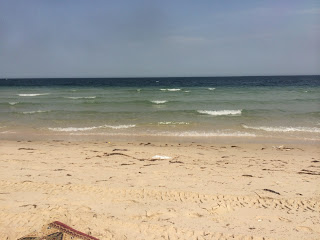 We got there around one in the afternoon and there were many people there, but by three o'clock a lot more people appeared to enjoy the day. 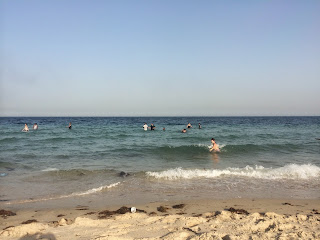 The Sun is pretty strong so you need to be prepared with sunscreen. My friend didn't use any and check out the difference -- the tan line is because he wore a shirt except when he went swimming. 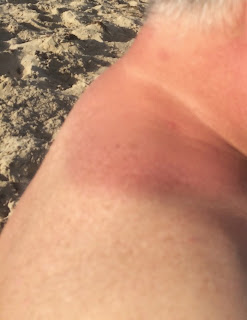 I figure we maybe have a month or so before it starts getting too hot to go to the beach. I plan to go at least two or three times more before the summer.


It's festival week here in Doha and last night I was at Souq Waqif to enjoy the entertainment there. They actually had a lot set up:

A stage for more modern performances, in this instance a contemporary dance troupe

Another stage for traditional music and dance, I'll take an educated guess and say these gentlemen are Omani 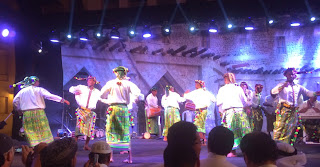 There was also a large kid zone with games 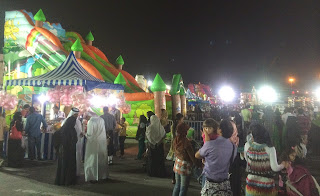 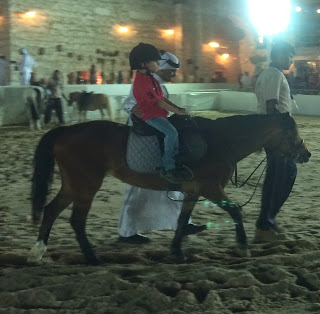 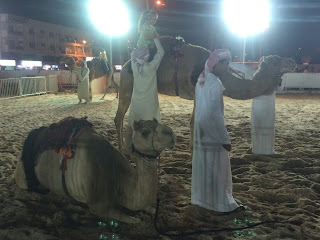 I believe the Souq Waqif Festival is on for the rest of the week. Unfortunately some of the parking has been taken up with the stages and games so consider using a taxi to get there. I think there might be a park-and-ride shuttle service but I couldn't find any details.


Last night I went to Katara with the Turkish friend of mine to see the Turkish Festival being held there. Traffic at Katara was pretty heavy (as usual for Thursday night) but thankfully, unlike a lot of places in Qatar, they have that underground carpark with plenty of room.

I figured they would be holding it at the Amphitheater but they had set up the stage at the far end of the Corniche area. Next to it was a couple of food stalls serving things like kebabs and ayran but the lineup was for the isekender. We lined up too. It was pretty good but not as good as some of the places I've eaten it in Turkey.

And at the stage was a variety of music, and dancing. 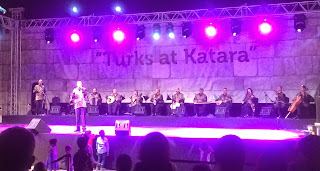 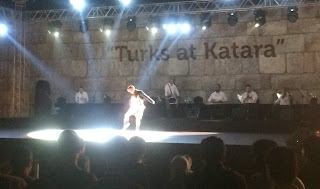 The last group reminded me a lot of the Fires of Anatolia show that I went to last year. They did a number of dances from various regions of Turkey, my friend recognizing dances from Izmir, the Black Sea region, and a place I think called Sev (sp?).