In mid-February Qatar has a national holiday to promote sports and exercise, Sports Day. It's held mid-week (probably so that people don't just take advantage of the long weekend to go on vacation).

My office, like many organizations, had activities planned but I received an invite from a friend at the Ministry of Foreign Affairs to attend their event at the Diplomatic Club. So on Tuesday morning I met my friend at the event and wandered around.

The Ministry had set up a ton of activities and there were hundreds of people there, I'm guessing mostly embassy workers and their families. Kids really enjoyed the camel and horse rides. 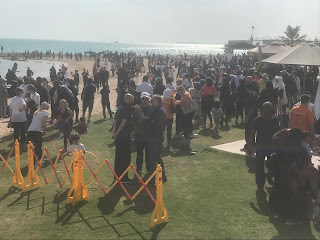 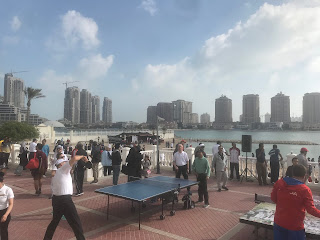 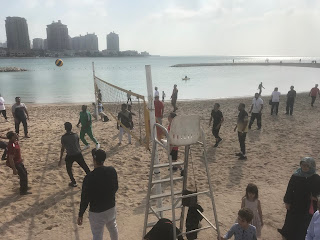 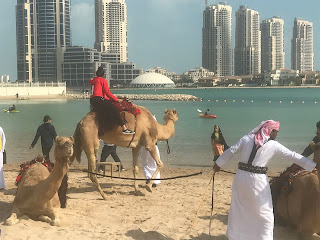 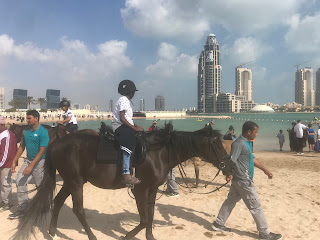 A nice buffet was also available in a hall, but they put the calorie counts with all the food, which guilted me into healthier choices. 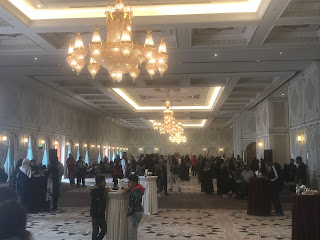 I hung out with a falcon for a bit. But for sport my friend and I wound up playing tennis at their court. I knew that they had a tennis court so I brought some racquets in anticipation. 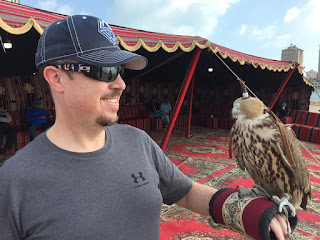 The exercise was probably all for naught though as we left there around noon to go to lunch at a French restaurant on the Pearl. The restaurant is well known in Qatar as it only serves one main dish -- steak with mustard sauce and fries. 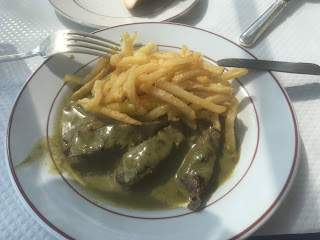 It was a good steak though.


Yesterday was an incredible day as Qatar beat Japan 3-1 in the finals to win the Asian Championships. Tons of firsts for Qatar:

-- first time winning (heck, they had never made it out of the group stages before)
-- their star striker, Almoez Ali, had 9 goals in the tournament, a new record
-- Almoez of course won the MVP award
-- Qatar's goalie Saad won best goalkeeper, only 1 goal was scored against Qatar the entire tournament

All the Qataris were telling me that they weren't too fussed if Qatar lost to Japan, beating UAE to reach the finals was good enough. You wouldn't have known that based on the celebrations last night! Massive crowds poured out onto the streets to celebrate the historic win. I was at a friend's majlis watching the game so we didn't go down to the Corniche to get stuck in traffic, but my social media accounts exploded as everyone was posting comments and videos. I must have seen Qatar's goals at least 20 times now.

The timing couldn't have been better. When Qatar was awarded as host for the World Cup in 2022 one of the criticisms was that Qatar had never even qualified for the World Cup before because they never had a great team. No one is saying that now.

Some of the credit would have to be given to the vision of the Aspire Program. Started in 2004, it trains promising kids at Aspire's world-class facilities and provides them with free schooling as well. Some of the early graduates from the Aspire program are now on Qatar's team. It made a big difference.

But the football doesn't stop there. Qatar has been invited to play in the Copa America in June, where they'll play against South American teams. I hope they do well.

Everyone is now really excited to see how the team will do in 2022!