Blogspot statistics show you which websites someone came from to visit your site. A couple years ago I saw a person come from a website called “mangobaaz” on an article regarding Eid breakfast. It turns out they had taken a picture from my blog (they noted it was from there) of a breakfast noting it was an “authentic Qatari breakfast”.

Naturally I told some of my friends and we had a bit of a chuckle. My Turkish friend was pleased to hear that his Turkish wife cooks “authentic Qatari breakfasts”. In truth, my Qatari friends pointed out, there was too much dairy on the table (butter, cheese) for it to be a Qatari breakfast. The tulip tea cups also give it away that it’s probably Turkish.

So what is a traditional Qatari breakfast? A friend of mine discovered a restaurant in the Avenue Hotel in Al Saad that was created by Qataris and serves traditional food. Its name is “Nahnu” (in English they call it “WeCafe” as Nanhu means “we”). We were always considering having breakfast there but could never get around to it as they're not open for breakfast on Friday.

Thanks to it being Sports Day today a bunch of us had the day off work yet the restaurant was open so we finally got there to try the breakfast.

When we asked for the breakfast here’s what we received: 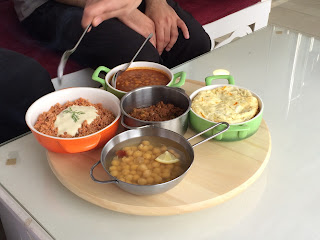 In the back is called lubba (small beans in a sauce), then middle from left-to-right: finely scrambled eggs blended with tomatoes, a spicy ground-meat dish, and eggs covering balaleet (a small sweet noodle, more on it here), in the front is chickpeas. We were also given two types of bread: standard pita bread as well as some chapati bread. You could also order karak or Arabic coffee.

The food was pretty good, and my friends agreed that they were traditional Qatari dishes. Way less dairy than the Turkish breakfast.

So that’s what an authentic Qatari breakfast looks like.