I happened to see a picture the other day in the newspaper and it served as a great example of a piece of Arab clothing called a bisht. A bisht is a robe that is normally worn over a thobe. It is usually worn only on special occasions. For example a Qatari groom and his father will always wear one at his wedding though the guests won’t.

So let's see some pictures to get the general rules for Qataris wearing bishts. I combed the internet for portraits of His Highness the Father Emir (Sheikh Hamad, not to be confused with his son Sheikh Tamim who is the current Emir) since he frequently wears them -- he attends a lot of special occasions.

1) you can wear lighter colored bishts during the day but should generally wear a black one at night. 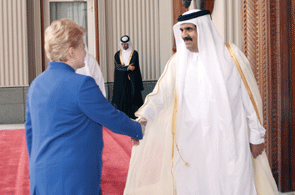 Here is His Highness the Father Emir in a recent meeting with the president of Lithuania [source: the Gulf Times]. As you can see from the lighting in the room it is daytime and His Highness is wearing a light-colored bisht over his thobe. A black bisht is acceptable to wear in the daytime as well, as evidenced by the Qatari gentleman in the background.

I discussed this with a Qatari friend and traditionally you should only wear lighter-colored bishts during the day but the rule is not strictly adhered to by many Qataris. He did note that His Highness follows the rule and wears light colors during the day and a black bisht in the evenings.


2) wearing one is not as easy as it appears. Your right arm should be in the sleeve but the left side should be draping over your shoulder in a specific way. 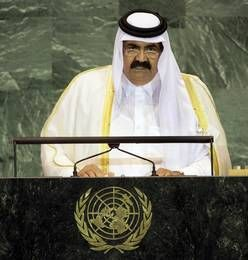 In this photo His Highness the Father Emir is giving a speech at the United Nations (at least I'm pretty sure it is at the United Nations). It must be daytime because he's wearing a light-colored bisht. Notice how the left side drapes over his shoulder and his left arm is not in the sleeve. If you look closely at the previous photo you will notice that his left arm is also not in the sleeve. It must take a bit of practice to ensure the bisht doesn't slip off the shoulder.

I'm not sure why the left arm is not put through a sleeve, I even did an Internet search and the only answer I was able to find was, “that's just the way it is". Okay then.

There is a specific style and etiquette to wearing a bisht properly. One of my Qatari friends lamented that many young Qatari men do not know how to properly wear a bisht. He blames negligence by the men of the family for not teaching the younger generation properly. 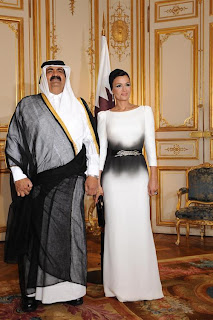 This picture of His Highness in a black bisht (standing next to one of his wives Sheika Mozah), is an excellent example showing how thin the fabric of a bisht can be. I'm going to speculate that bishts are typically made of a thin fabric because wearing an extra layer of a thicker fabric would not work well in the heat of the Arabian Desert. The dark color of the bisht also clearly shows that it is draping over his left shoulder.

I was told that because the fabric is so thin it likely means that the bisht was made in Najaf, Iraq, where the finest-quality (and most expensive) handwoven bishts are made. 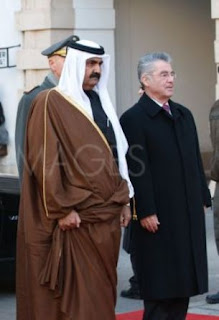 It's not always hot in the desert so a bisht can also help against cool weather. In this picture His Highness is at a meeting in Europe. As you can see the gentleman on his left is wearing a coat so it is cold out. The bisht is not black so it must be daytime and it is clearly made of a much thicker fabric than the black bisht in the previous picture.

I also like this picture because it shows His Highness wearing a black thobe. I've noted previously in my blog that Qataris may wear non-white thobes in the winter, also made of a thicker fabric to help against the cold. If you see a picture of a Qatari wearing a non-white thobe then it means that the picture was taken in winter.

(Note: I have been told that Emiratis might wear coloured thobes at any time of the year so if you see an Arab wearing a coloured thobe in hot weather he could be an Emirati.)

For more pictures of Qataris wearing bishts, click on the "Qatari Wedding" label in the right-side column of the blog. I have numerous wedding photos showing Qatari grooms wearing bishts.

Very interesting . Now I know what a Bisht is. Thanks