The Government announced four cases of Omicron yesterday but all from people entering the country and who had been undergoing quarantine.

That said I expect an announcement shortly as a large-scale screening was undertaken. A week ago I had received a message asking me, since I attended an Arab Cup match, to take part of a health survey & screening by going to a health centre on the 18th (also Qatar's National Day) and get a free Covid test, and they'll also check the swab for influenza and RSV. I thought that was a good thing to take part in so I went. I figure I'll get the results today or tomorrow. I'm sure I'm fine but the survey will allow the Government to get a better idea of the presence of Covid in people who attended the matches, and they'll likely scan the samples for Omicron as well. If the overall results are not good then restrictions and lockdowns will be happening.

As for the Arab Cup the tickets came in fast and furious (having friends working in places that get hospitality tickets help) and I wound up going to three more games. Firstly the Tunisia/Egypt semi-finals at Stadium 974. 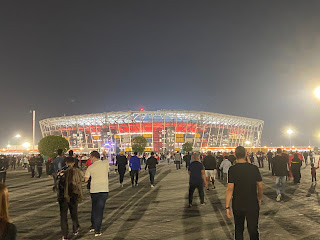 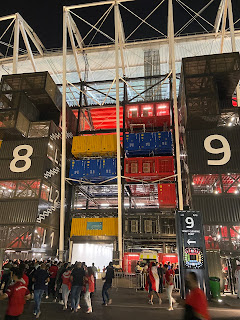 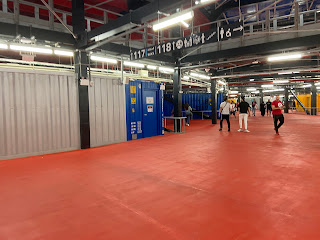 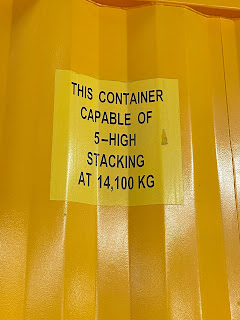 It looks a bit weird, right? Like it would be a street art museum? Well, this stadium is temporary and made up partly of shipping containers. When Qatar bid for the World Cup one of the questions was what a country of 2.5m people would be doing with eight huge stadiums, and Qatar stated that some of them would be modular, to be dismantled, donated to developing countries, and reassembled. That's what Stadium 974 is (named 974 as it is Qatar's phone country code and is the number of shipping containers used).

The atmosphere inside was great and I had seats in the corner, between the Tunisian fans and the Egyptian fans. It was pretty noisy. 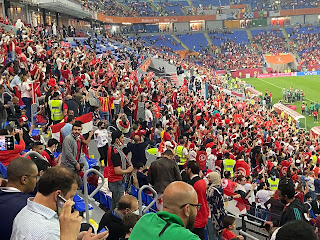 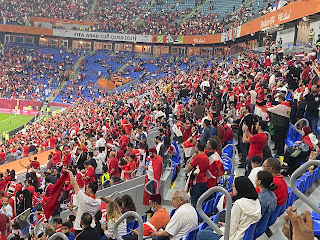 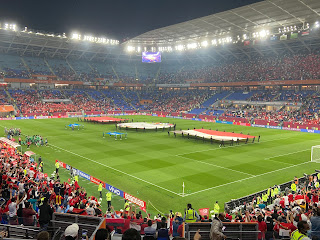 But I couldn't stay for the whole match as my friends and I had tickets to the other match that evening, the Qatar/Algeria semi-final match at Al Thumama Stadium. The place would be full so we needed to give ourselves lots of time to get there. 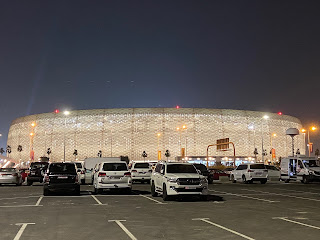 It's a beautiful (and permanent) stadium. designed to look like a ghafiya, a white head covering men wear underneath the ghurtra. 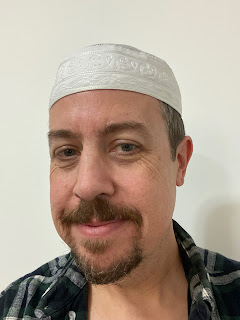 Much like Al Bayt Stadium in Al Khor we had to park across a busy highway from the stadium but they had a nice pedestrian walkway over the road. 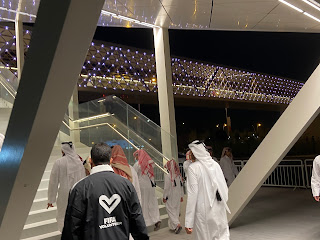 This time we had really nice seats, right in the middle. 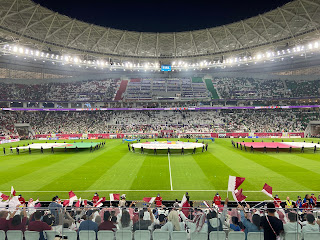 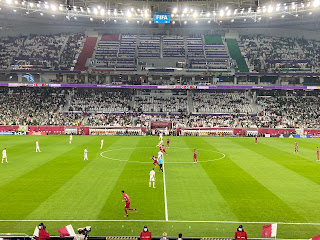 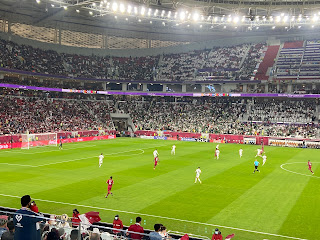 It was a good game, lots of crazy things. In the end the injury time wound up being something like 19-20 minutes (might be a new record?) because of all of the drama, but Qatar lost 2-1 due to a last-play penalty kick by Algeria.

While I was watching the game I showed up for a second on TV when the cameras were doing shots of the crowd. I then received messages from friends with screenshots showing me (I cropped the photo so my friend's faces aren't shown). 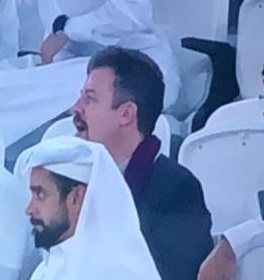 Another person at work also commented that they saw me on TV. I think because I was wearing a suit in a sea of white thobes I stood out on the screen.

Qatar is not a big country and people keep an eye out for who is in the crowd and quickly circulate stills on social media. Case in point, there were some ladies seated a row behind us and a few seats down but from the angle of the TV camera they looked like they were in the same row. One of my Qatari friends who was with us at the game told me he woke up the next morning to his wife holding a screenshot of the picture and asking, "Who are these ladies you're sitting next to?".  Lol.

Naturally the home crowd was disappointed as Qatar was not going to be playing in the final but it did mean that there were tickets to be had for the Third Place match between Qatar and Egypt on the 18th, so a bunch of us went to that. It was at Stadium 974 as well. 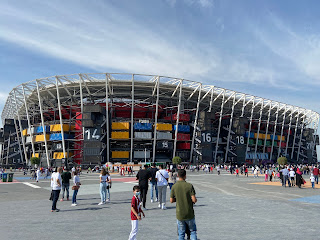 This time we had nosebleed seats. 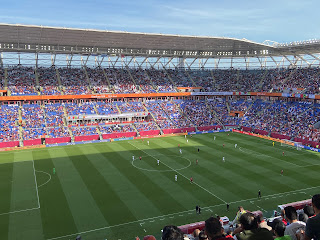 The game was not particularly exciting, Qatar fielded many of their 'B-team' players and brought on the big guns in the second half. Even then the score was 0-0 and it went to penalties, with Qatar getting the win.

The final (Tunisia v Algeria) was that evening in Al Khor, but we watched it on TV at a majlis. It was an intense game, both teams really came to win and after much drama Algeria pulled through 2-0, with the second goal occurring on the last play to officially kill Tunisia's hopes of a comeback.

So, a busy last few days. I didn't even go see any of the National Day events as I was busy watching soccer games.