The Value of License Plates

In this part of the world people love license plates with low numbers or easy-to-remember numbers, like 300003 or 515151. They will pay a premium for plates with low/cool numbers. This applies to phone numbers as well, and some numbers can run into tens of thousands of riyal. The phone companies know this, they're not stupid, so when they issue numbers you have to pay extra for nice numbers.

As for license plates one way to sell nice plate numbers is to auction them. There was an action recently by the AlBahie Auction House, I only knew about it when I saw a catalogue sitting around a friend's majlis. 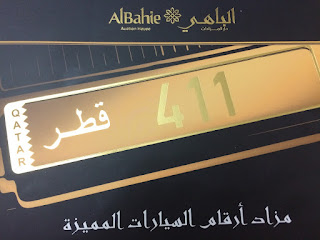 All-colour, glossy, with a full page dedicated to each plate number that was available. A bit over the top? Not until you read the prices, for example: 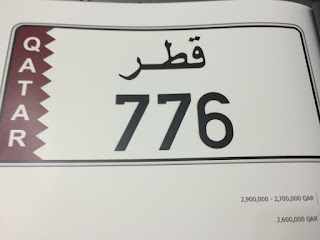 Nice low number (most plate numbers are 6 digits), a bit of a pattern, so how much for this? I'm not sure if you can make out the lower right corner, it says:

And while that was definitely one of the more expensive ones it wasn't the most expensive. That was the 411 plate on the cover, inside the catalogue it notes an estimated price over US$1,000,000 ! Many of the other plates available were going for a more modest US$80,000-200,000, depending on the number on the plate.

I'm not sure why people are willing to pay so much for a number plate but it clearly a lucrative business. Many people in Qatar earn good money buying and selling license plate and phone numbers. If you look at the classified of the Arabic papers there are usually a lot of ads selling numbers.

I'm not saying it's wrong, people in the West can pay huge sums of money for things like stamps, coins, signatures or memorabilia, it's just something I'm still not used to.

So if you see a low license plate number in Qatar chances are someone paid a lot of money for it.